Today Microsoft unveiled the Xbox One at its Redmond, Washington campus. As the battle for the living room rages on, Microsoft has won a decisive victory that puts it well ahead of the competition.

The Xbox One is just as much for all-around entertainment as it is for gaming, perhaps even more so. It’s designed to be the one box that sits below your TV and does everything: games, movies, live TV, music, surfing the web, messaging, and even video calling. Minority Report-style gestures control the experience, it can recognize your face when you walk in the room, and you can talk to it like Siri on steroids.

Should Apple be worried? The answer is no, at least not yet.

The Xbox One demonstrates how to play to an audience. And that audience isn’t the same as Apple’s.

“Microsoft has included everything but the kitchen sink.”

While the Xbox One certainly looks like a fantastic entertainment hub, it would totally overwhelm my mother. Microsoft has included everything but the kitchen sink. To go from a traditional remote + controller combo to pinch and pull gestures with voice commands is quite the leap, even for a tech nerd.

If you use Netflix, get pumped for the new Call of Duty, and are hooked into Xbox Live, then the One console is a no-brainer. It’s a product that will instantly appease hip, young techies and gamers. The entertainment system aspect is definitely there, but the Xbox is still based on the foundation of console gaming. That won’t change, and that ultimately limits Microsoft’s reach.

On the other hand, the Apple TV is for everyone. You can mirror iOS games to the big screen, but the crux of the product is not built around gaming at all. Playing games is just one part of the Apple TV experience. The Apple TV is ultimately designed for watching and listening to stuff. Content is king for Apple. It always will be.

Xbox One owners will have little need for an Apple TV, unless the ability to use AirPlay is of great value. But most people won’t be buying a more expensive Xbox One instead of a $99 Apple TV. 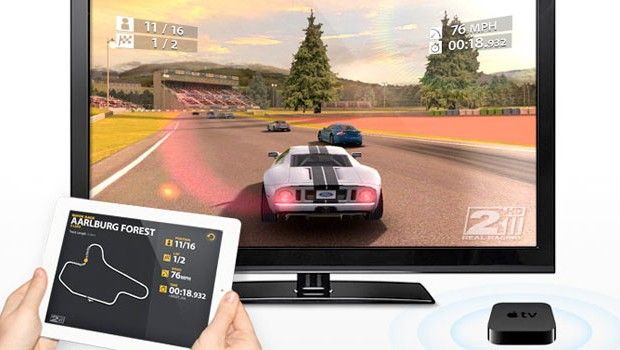 If the Apple TV doesn’t get new features or replaced entirely over the next couple years, there are going to be problems. Competitors like Microsoft are piecing together what it takes to create a modern living room experience. Apple hasn’t solved it yet, and today Microsoft got closer.

One of the Xbox One’s coolest features is the ability to instantly recognize a person’s face and track command gestures with the Kinect sensor bar. That combined with voice support for navigating creates a pretty compelling, futuristic experience. We reported that Apple was prototyping the same kind of features in a HDTV last year. Little is known about Apple’s current plans for TV, other than the fact that the company has desperately been trying to secure licensing deals for streaming live programming. A standalone ‘iTV’ panel could be involved, or the current Apple TV could be turned into the internet-connected, app-ready, TV guide/DVR you’ve always wished you had.

The Apple TV hasn’t received a major, fundamental change since it was released in 2006. Sure, the box has been made slimmer and sleeker. The interface has changed, and a few app-like channels have been added, but the hockey puck is still pretty much the same. Apple has called it a “hobby” for years, although recent comments from Tim Cook suggest that something more is brewing.

This living room stuff takes time. It’s been nearly eight years since the Xbox 360. I wonder how long it will take Apple.