Mobile ecosystems analyst firm, VisionMobile, today released its fourth Developer Economics report. The 2013 report, sponsored by AT&T, Mozilla, and Nokia, looked at developer opinions, charting out which platforms have the highest mindshare among developers as well as which platforms make their devs the most money.

As will be completely unsurprising to those reading this site, iOS leads the platform mindshare among developers, with 48 percent of them reporting it as their lead platform. Android and BlackBerry are next, with many developers reporting them as a main development target. Windows Phone and HTML are seen by those surveyed as platforms to extend app distribution, and not as a primary target for development.

As far as mindshare goes, however, Android continues to lead, with 72 percent of the surveyed devs making apps for Google’s alternative smartphone and tablet OS. This is an increase of 4 percentage points over last year’s report, with a concurrent 5 percentage point drop in mindshare among developers for iOS.

Another key finding in the report is that developers who do not create apps for Android or iOS generate an average of half the revenue of those that do. Advertising is now the most popular ways to generate that revenue, as 38 percent of developers in the group of developers surveyed use advertising as their primary business model.

Tablets are starting to have a similar mindshare among surveyed developers as smartphones, with an 86 percent majority of developers reporting that they develop on tablets. 76 percent of the developers point to the iPad as the best monetization and development platform. Only a few developers see smart TV as even a thing, with 6 percent reporting development in that market. 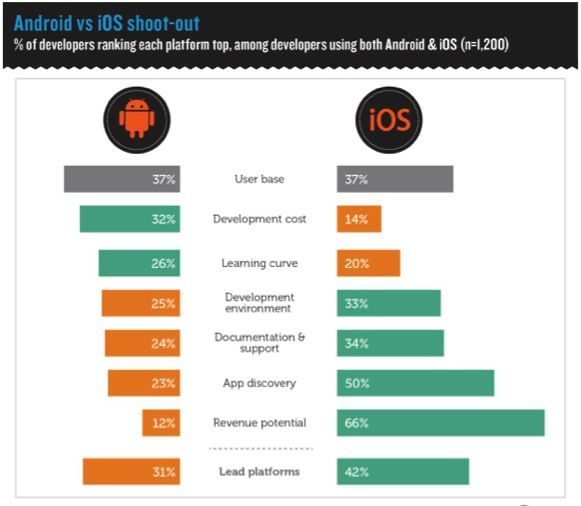 This final table is telling, showing that the installed user base among surveyed devs is the same, across iOS and Android, but the development cost and learning curve in using iOS is lower. The Development environment, documentation, app discovery, and revenue potential is reported by the developers that use both platforms as better on iOS.

While this may change in the coming months, possibly reflected in next year’s report, for now, iOS remains the top development platform, at least for the ones who participated in this study.