Apple is not a company that is afraid to introduce a product that will cannibalize other Apple products. No one buys iPod Classics anymore, they buy an iPod Touch or iPhone. The MacBook Air cannibalized sales of regular MacBooks. And many assumed the iPad mini would cannibalize sales of the iPad, but that assumption is false.

Some analysts believed the iPad mini would cannibalize sales of the iPad by a rate of 10 to 20 percent. A new survey by Cowen and Co. shows that while the iPad mini has been selling well, it hasn’t been cannibalized its bigger sibling, but it is killing PC sales.

Cowen and Co. surveyed 1,225 U.S. adults and found that 12 percent planned to purchase an iPad mini in the next 18 months. Of those 12 percent, a staggering 52 percent said they’ve never owned a tablet before. Furthermore, out of those that said they plan to purchase an iPad mini, only 16.6 percent said they’ll be purchasing it as a replacement for another device, with 42 percent of those people saying it will replace their Windows PC. 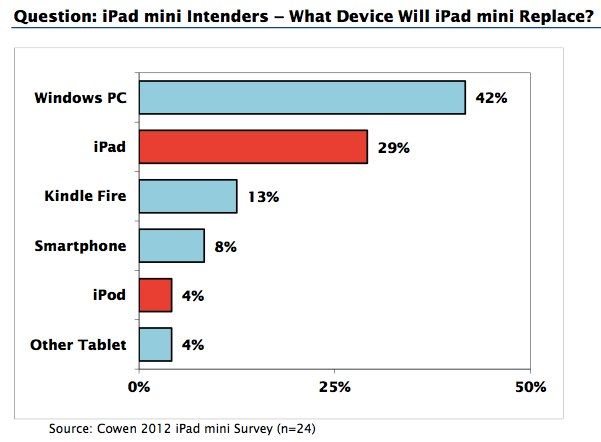