I’m posting this cute little gadget mostly for the benefit of Cult of Mac’s esteemed deputy editor John “olde-worlde” Brownlee, a man so reverent of natural materials that he once swapped out the ugly, modern sheet of borosilicate glass atop his induction hob for a shiny sheet of vintage, tanned pigskin.

With hilarious (and bacon-scented) results.

So this cable wrangler should be right up his street, especially as it is called the “Cable Fondler,” a name which will appear to Mr. Brownlee’s other weakness: he’s a colossal perv. 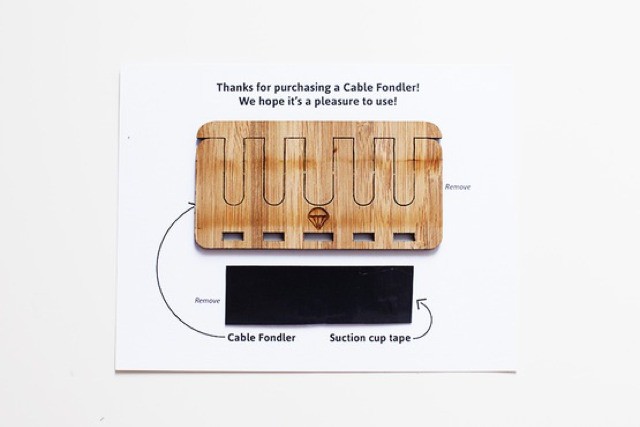 The Cable Fondler is as simple and eco-friendly as it gets. It ships flat, and the two halves are cut from a single sheet of bamboo “wood.” When separated, the teeth of one half slot through holes in the other to form a base, and the teeth of the top half then make a place to stow unplugged cables.

It’s as if the Fondler was a baleen plate and the cables were oversized plastic krill. This is doubly appropriate for our deviant deputy ed, as he has had his eye on a set of these whale foreskin barstools for some time.

The Fondler is secured to the desk-edge with a strip of re-stickable adhesive tape, and adds a little rustic “charm” to your otherwise perfectly handsome and high-tech desk setup.

The price is a mere $15. Easy for you to rustle up, but likely far more than the Cult of Mac team will manage to collect for Mr. Brownlee’s Christmas gift. Last year we managed only $3.14, plus a Galaxy Tab — hardly a great haul.