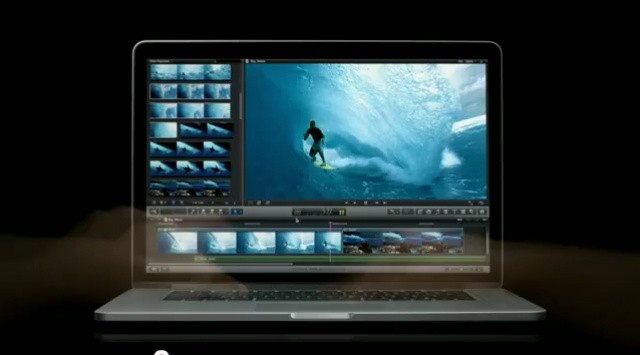 Since the Apple II, what has really set Cupertino apart from other computer makers is fusing software and hardware together into a frictionless alloy that is, at its heart, experiential for a user in the same way that driving a high-end automobile is. Performance and hardware mean absolutely nothing except as it relates to the way the wheel feels in your hand or the engine feels vibrating beneath you. What Apple believes, and spends so much effort and money achieving, is that there should be no difference between using a computer and driving a car: just as in driving, the man, the machine and the software all must become one.

So let’s ignore specs or technology for a second. Let’s just talk a little bit about what it feels like to use a Retina MacBook Pro.

The only thing faster is waking up your iPhone or iPad.

The first thing you’ll notice when you boot up a Retina MacBook Pro will be the speed with which it boots. This is as close to instant-on as you can find in a notebook: a fifteen second boot-up time, and only three seconds to awake from sleep. The only thing faster is turning on your iPhone or iPad (and even then, they’ll take longer to boot up from power down). It’s fast. In fact, it’s so fast that even when restarting the machine with a dozen or so apps and browser tabs open, the apps re-opened in the blink of an eye. The Retina MacBook Pro blurs the line between being powered off and being asleep, which is the way Apple wants it.

Then there’s the display, of course. We’ve already talked about that in an earlier section, but it bears repeating: at its best, reading text or viewing high-resolution images or videos on a Retina MacBook Pro is like looking into a lightbox of vivid, living print. If anything, because of the size of the display, it’s even more of a jump in perceived visual quality than the evolution of the iPhone or iPad to Retina was.

Nothing else on the market even compares, and it immerses you in using your Mac in a way that other Macs don’t. In apps designed for the MacBook Pro Retina display, all of the little jagged edges that used to imperceptibly catch hold of your brain and prevent you from sliding into a feeling of seeing something less virtual than real have been smoothed away.

Unfortunately, there’s a catch. This only works when an app has been updated for Retina, or when a video or image is suitably high-def. And while Apple has eliminated almost all of that visual friction in the core OS X apps, the rest of the Internet and third-party OS X library looks beyond terrible, as if everything was covered in a thin layer of mucus and dust.

Google’s Chrome browser, for example, looks as if it’s been ineptly upsampled from a much lower resolution… which, of course, it has (Chrome’s developer builds have already corrected this problem). Another common app, Twitter for Mac, looks so bad, it looks like a video transmission from Voyager passing through a gamma radiation cloud.

Imagine the most beautiful painting you’ve ever seen in your life positioned right next to the filthiest toilet in the world and you’ve got a good idea of what non-Retina apps look like.

On an iPad or iPhone, every app takes up the full screen, so if you use a non-Retina app, you might notice it looks fuzzier, but you quickly adjust while you’re using the app because there’s nothing to compare it to on-screen. In other words, using a non-Retina app on a Retina iPhone or iPad, the whole screen switches over to non-Retina resolutions. On a Retina Mac, though, you can use multiple apps side-by-side, and most people do, constantly.

That means that next to a Retina app, a Mac app that hasn’t been updated sticks out like a sore thumb. Imagine the most beautiful painting you’ve ever seen in your life positioned right next to the filthiest toilet in the world, and you’ve got an idea of the problem. And it’s unlikely that this problem is going to go away for years.

That said, you can make a compromise, and it’s a nice one. The new Retina MacBook Pros default to a HiDPI 1,440 x 900 pixel desktop, meaning that each pixel of a normal 1,440 x 900 display is essentially comprised of four smaller ones, giving unprecedented visual clarity. You can, however, adjust the settings of a Retina MacBook Pro so that it sacrifices clarity for desktop space, “shrinking” the size of apps and UI elements in relation to the desktop, up to a maximum of an equivalent 1,920 x 1200 resolution. We love this mode: it not only makes non-Retina apps look significantly better, it also gives notebook users a lot more desktop space… a huge perk if you work in multiple windows side-by-side fairly often.

Another improvement in the Retina MacBook Pros that isn’t getting the attention it deserves is the new speakers. In a word, they sound great, with clear highs and mids, and decent lows for a notebook. It’s true that there’s no mistaking them for a dedicated external sound system with a serious subwoofer, and they lack even much of the oomph of the iMac’s speaker system, but these are still impressive, room-filling speakers for a notebook this streamlined. If you use your laptop to play a lot of music, you could have a respectable DJ party with these.

When we originally started reviewing the Retina MacBook Pro, we were concerned at first with the compromise in storage that comes with a switch to flash storage, which is much more expensive per gigabyte than a physical hard drive. The base model of the Retina MacBook Pro ships with only 256GB of storage; comparatively, a 2012 non-Retina MacBook Pro starts at 500GB, and for the same price as the base Retina MacBook Pro, you can get 750GB of storage. In practice, though, we found the limited storage space to be a non-issue. So much of our data is now stored in the cloud that we needed much less default storage space, and Thunderbolt and even USB 3 external storage options are fast enough that they can supplement your Retina MacBook Pro’s flash storage with negligible performance hits for all but the most system exhausting of tasks. We even ran apps from our USB 3 drive, and while you wouldn’t mistake their boot-up times or performance to apps that ran on the built-in flash storage, they ran almost as well as they would on a MacBook Pro with a physical drive.

Battery life is up to Apple’s promises, as well. In fact, running a video at half brightness on a loop with WiFi on, we got more than an hour more battery life than Apple’s seven-hour claim. This is in keeping with Apple’s new way of measuring battery life, which is to underpromise. That’s refreshing, given the fanciful, hyperbolic battery claims of some of Apple’s competitors.

Compared to the MacBook Air, the Retina MacBook Pro feels like an engorged monster.

Finally, there’s the weight, the heft, the feel in the hand and in the bag. The Retina MacBook Pro feels like the most solidly and seamlessly constructed MacBook yet, but in practice, the thinner, lighter build isn’t profoundly different than the older, unibody MacBook Pros. It’s better, but this isn’t the same kind of obvious upgrade in form factor that switching from a MacBook to a MacBook Air was, and compared to effortlessly slinging a MacBook Air into your bag, the Retina MacBook Pro feels like an engorged, heavy and massively huge monster.

Next Page: Should You Buy One?