Update: In an official statement today to Cult of Mac, Walmart U.S. confirmed that these new price listings were a mistake that have been corrected at certain stores throughout the country. “Yesterday, we experienced a pricing error in limited stores,” said Walmart. “This has been addressed and the normal prices are in effect (iPhone 4S – $188, iPhone 4 – $88, iPhone 3GS – $0.97).”

We’ve gotten word that Walmart has dropped its prices on the AT&T iPhone 4 and iPhone 4S in its retail stores. Without any notice, the price of the 8GB iPhone 4 on AT&T has dropped from $88 to $34. Also, the white and black 16GB flavor of the iPhone 4S on AT&T is now being offered for $114, down from the original $188 listing. 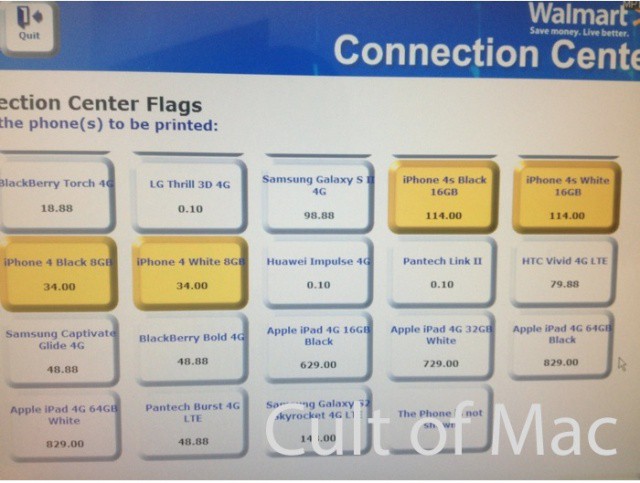 The new prices apply for AT&T upgrades and new activations. Last year the iPhone 4 dropped to $114 at Walmart in September — one month before the iPhone 4S was announced in October. Interestingly, the Verizon iPhone doesn’t seem to be included in this new Walmart sale. Walmart employees are usually notified a week in advance for promotions like this with flyers and such, but these price changes came totally unannounced.

This news comes to us from Edmond, Oklahoma, and we’re not sure how widespread the sale is in the United States, or how long it will last. AT&T has yet to clarify if this price drop is a national carrier promotion, or a change decided by Walmart. Retailers usually set the prices, so we’ve reached out to Walmart for comment and will update this article if we receive a reply.

In the meantime, visit your local Walmart and let us know if these new prices are available in your area.