iOS is the best mobile OS in the world but it certainly isn’t without its flaws. There are a few areas that need improvement. Is the iPhone Lockscreen one of them? We’ve seen conceptual designs that change the information displayed on the lockscreen and this new idea proposes to change the way the camera is accessed on the lockscreen, but does it make any sense?

Press & Slide is a concept created by Brye Kobayashi that aims to make the iPhone Lockscreen more intuitive. Apple’s recent addition of the “slide-up for camera” option on the iPhone lockscreen was a welcomed addition to iOS, but it has lacked that certain Apple charm that makes their UIs intuitive. The current camera option requires sliding a finger up on a vertical plane, rather on the horizontal plane that users are used to doing to unlock their phone. 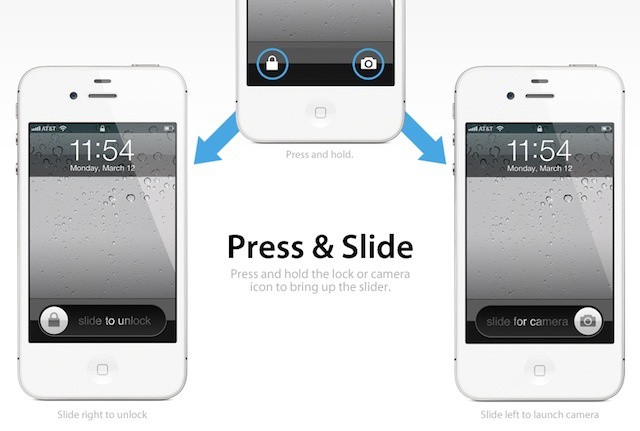 Bryce’s idea puts both the camera unlock and iPhone unlock on the same horizontal plane. To jump to the camera from the lockscreen users simply press the camera button and slide it all the way to the left. To unlock the phone, press the lock and slide to the right. Bryce also thinks Apple should use circles for the toggles on the lockscreen to maintain consistency with the sliders that were introduced in iOS 4. The concept is actually pretty similar to that found on Android phones like the Galaxy Nexus.

What do you think? Is this concept idea something you want Apple to implement? Or would it be more unintuitive than the current design?