YouTube wasn’t supposed to be a music player, but that’s what a lot of people use it for. There are millions of songs on YouTube – the only problem is finding them.

That’s why you might enjoy a Mac app called Musictube, which takes the hard work out of finding and playing the songs you want. If you want a video jukebox on your Mac, this is it.

Instead of having to fight your way through YouTube’s own search and navigation, you get a single box into which you can type what you’re looking for, be it an artist, a song, or an album. The results are shown as a collection of album sleeves and a single additional click starts the music playing. 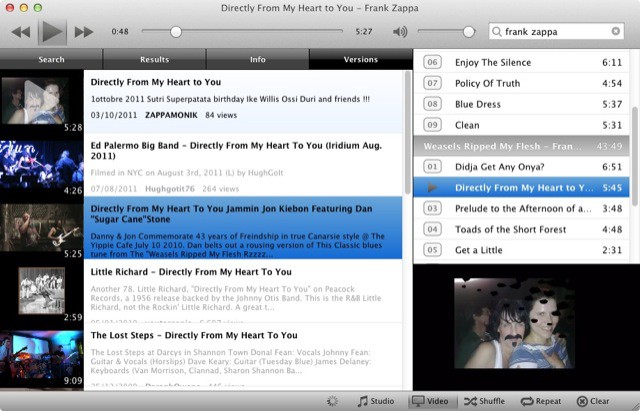 Although everything’s coming from YouTube, the emphasis here is on the music rather than the video. You don’t have to have the video showing at all if you don’t want to.

Another particularly nice touch lets you pick out live versions to listen to – or to exclude, if you’d prefer the studio original.

This is a very simple app, very clear to understand and fun to use. It works on Snow Leopard and Lion, and supports full screen mode in the latter.

You can get it on the App Store for $11. If you want to check it out before buying, there’s a free trial version available from the developer’s website which shows all the features of the app, but interrupts the music with reminders to upgrade.

(Via One Thing Well.)