I’ll confess right from the start that I’m not much of a gamer. I tend to just play lightweight puzzles and dip-in-and-out games that don’t demand too much attention. But Aquaria is something special – an incredibly detailed action/RPG that’s compelling enough to pull even a non-gamer like me right in, and keep me playing for hours.

In Aquaria, available now for iPad, you play the character of Naija, a sea-nymph whose habitat is below the waves, but whose memory is somewhat scrambled (ain’t that always the way?)

Naija’s world is the first thing you’ll notice. Lovingly created, it’s both huge and incredibly detailed. Aquatic creatures of all shapes and sizes lurk in its depths. Some of them are Naija’s friends, some her enemies. Also lurking in the deep are all sorts of other objects, plants, treasures and foodstuffs.

There’s a decent variety of gameplay. Although the pace is relatively slow, allowing you plenty of time to explore the vast levels, there’s lots of things to keep you occupied. When things are quiet, you can check out your inventory of items and investigate ways of combining them. Add two pieces of food together in the Cooking menu, and create new things to eat. Over time, these become useful elsewhere in the game.

Elsewhere there are puzzles to solve, mazes to get through, and fast-paced battles to fight. 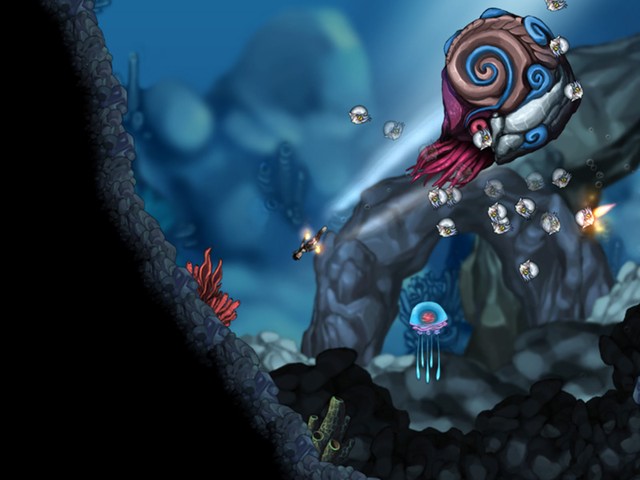 Naija interacts with her environment by singing. A tap brings up a menu of colored shapes, which act as an instrument you can play. The songs start basic and soon get more complex.

Downsides? There aren’t many. The game is 300MB+, so make sure you have room to install it. Some users have used the App Store comments to complain about frequent crashes, but I didn’t see a single one while I was playing.

The only real problem I encountered was the singing menu, which hovers in a circle around Naija herself. Tapping the notes sometimes meant that action elsewhere on the screen – including attacking bad guys – was obscured by my fingers and hands. This was occasionally frustrating.

That problem aside, Aquaria is a compelling and engaging game for all ages, offering a nice variety of challenges and a beautiful, vast virtual world to explore, all for just five dollars. Totally worth having.