We have no doubts at Cult of Mac that iPhone 4S sales this week-end are going to be a blow out and the first thing people will probably try to do after obtaining their iPhone 4S is to converse with Siri.  Well it looks like this morning with way too many people to talk to Siri has gone offline or maybe its just out on a coffee break.

I had a late day yesterday and I’m only now getting around to playing around with and testing Siri. I think the rest of you might have worn it out since it isn’t as snappy as it was yesterday when I tried  a few preliminary requests.

My first query this morning ended with the result that Siri telling me it was offline (see image above). I tried asking it “Siri what is the meaning of life? ” and it has spun its wheels for several minutes now.  After telling me to wait a second.  Well as those seconds stretch into minutes Siri finally gave up on that query and said: 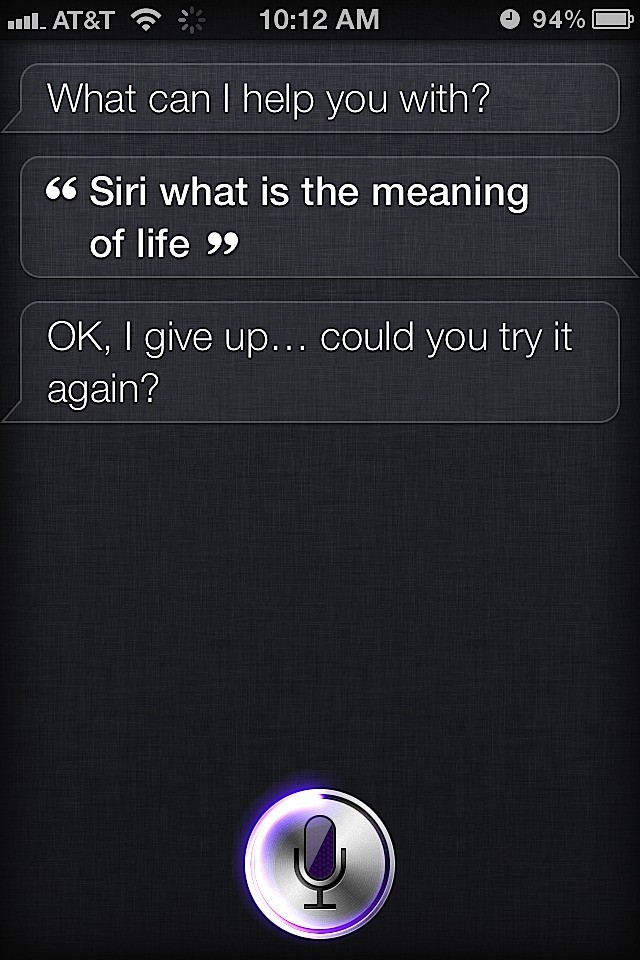 I tried again. No luck. Right now Siri isn’t talking or at least providing the services or information I need. Oh and as everyone should know by now the answer is, “42. ”  Thanks anyways Siri.

I’m sure that Apple will work the kinks out of Siri and a few outages are expected from time to time, but I hope they work out the kinks soon because Siri appears to be the best feature the iPhone 4S offers. I’m looking forward to running it through its paces. I’m also looking forward to it coming out of beta so that perhaps we can rely on it more than we can now.

Anyhow maybe Siri is just overwhelmed with requests now so could the rest of you shut up so I can get a chance to play with it? Thanks.