Today an AT&T customer service representative (CSR) lays the blame for the current upgrade pricing squarely on Apple, inc. According to the AT&T CSR we spoke to this morning upgrade eligibility dates and the pricing models are all dictated by Apple, Inc. and they cannot be changed.

If you’ve had an iPhone long enough you’ll recall a similar customer service fiasco a couple of years ago with the iPhone 3GS.  If you missed the last time early adopters weren’t able to upgrade and extend their contracts take a look at Apple and AT&T Royally Screw Loyal iPhone 3G Customers it wasn’t pretty.

If you stood in line last year to buy an iPhone 4, the year before that for an iPhone 3GS, etc., and count yourself a loyal Apple customer? Well, we’re all idiots, because Apple and AT&T just screwed us royally and now it looks like history is repeating itself.

Mr. Cook might be starting off on a bad foot with loyal Apple iPhone customers that have stood in line for the latest and greatest iPhone model since it was first released in 2007. Apple customers expect and demand access to the latest Apple gadgets and they expect their loyalty will be rewarded.

Don’t believe me? Here it is in black and white on Apple’s website, right out of Apple’s upgrade eligibility tool: 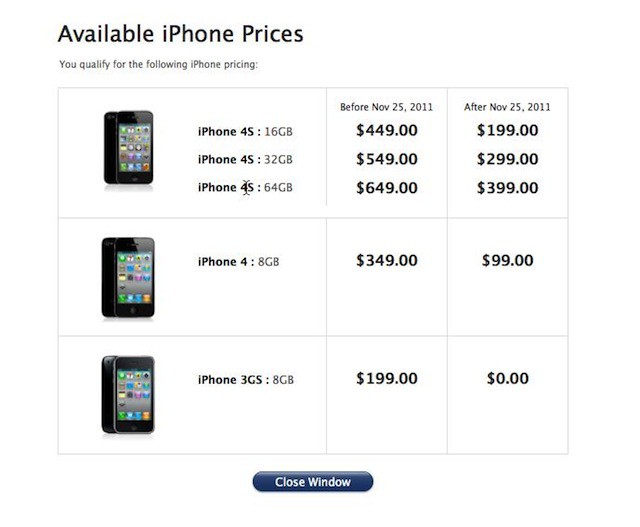 You can check your own eligibility if you are an AT&T or Verizon customer as I explained yesterday.

This pricing applies to iPhone 4 customers who purchased their iPhone on June 24, 2010 — the one year anniversary of the iPhone 4 launch. Last year when the iPhone 4 went on sale, Apple and AT&T offered subsidized pricing to owners of the iPhone 3GS (and had owned it for a year).

The prices advertised during yesterday’s event — $199 (16GB), $299 (32GB), and $399 (64GB) — applies to “new and qualifying customers,” which apparently doesn’t include current iPhone 4 customers who have already had their phones nearly four months longer than iPhone 3GS owners did last year.

I’ve put in a call to AT&T and Apple for an explanation, but as of this afternoon my queries have fallen on deaf ears. Attempts to contact Seth Bloom and Mark Siegel at AT&T and Katie Cotton at Apple haven’t been successful.