The portable radiation sniffer called  RDTX-PRO, priced at $350, might cost more than your device, but it looks like it’s a hit. Launched yesterday, at this writing it’s already out of stock on the company website. 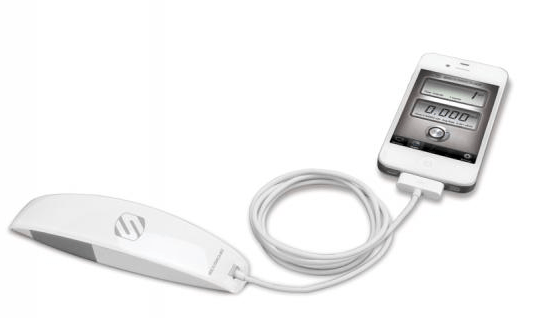 The wand-like device attaches to an iPhone or iPod Touch through the dock and boasts 96-hours of battery life.  The display shows levels ranging from safe, elevated to dangerous and can sound an alarm. The inevitable social component lets you share those levels (Look ma, I’ll be glowing in the dark!) via Twitter and Facebook.

The website is light on specs (“solid-state design ensures consistently accurate gamma radiation detection”) but the presser offered this expert thumbs up:

“I was extremely impressed with the accuracy and performance of the RDTX-PRO from Scosche,” said Julius James, Radiation Specialist of Fluke Global Calibration Laboratories.  “The detector is as accurate as units that cost significantly more and is much smaller in size.”

Perhaps to get around the bad press from other apps — rejected by Apple in iTunes in the wake of the Japan disaster — Scosche will give $10 from every sale to charities aiding those affected by the Tohoku Earthquake and Tsunami, with a goal of 1 million dollars.  The Scosche device comes with a free companion app, currently not available over iTunes.