The Games category is by far the most popular corner of the iOS App Store, and a new report has surfaced that says most people spend their money on virtual, in-app goods and upgrades in their favorite games.

In terms of Android and iOS users, the ‘freemium’ model seems to be the reigning king of mobile gaming. Users are starting to prefer free games that offer in-app upgrades and purchases to unlock new content.

Flurry published the results of data collected from 57 million purchases on both and Android and iOS platforms, and the title of the report reads, “Freemium Mobile Gamers Spend More Money on Items They Don’t Keep.” 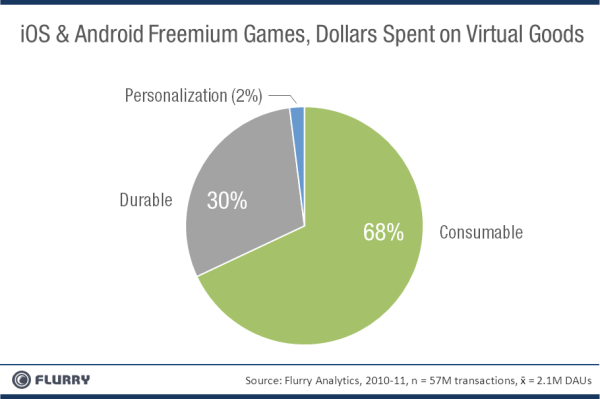 Although Apple takes a 30% cut from in-app purchases, developers are still making good cash on the freemium model. A free title, like We Rule, that sells virtually ‘consumable’ goods tends to see much better returns than a game that sells for a one-time purchase price.

The social aspect of games like Farmville are a huge reason that users get addicted to similar freemium titles, and the incredibly simple process that Apple has established for in-app purchases makes the freemium model an attractive money-making strategy for app developers.