If you walk into an Apple store these days you will find tons of iPads on display. No, we aren’t talking about the iPads that are actually available for purchase, but instead the ones that sit next to each and every Apple product with descriptions, details and interactive elements.

These iPads run an internal Apple app called “Smart Sign,” and the app is meant to help connect you with Apple store employees and show you information about products. If you’ve ever wondered what these iPad “Smart Signs” are actually made of, someone has been able to see what’s going on under the hood of one of these iPad displays. Let’s just say, it isn’t your typical iPad. 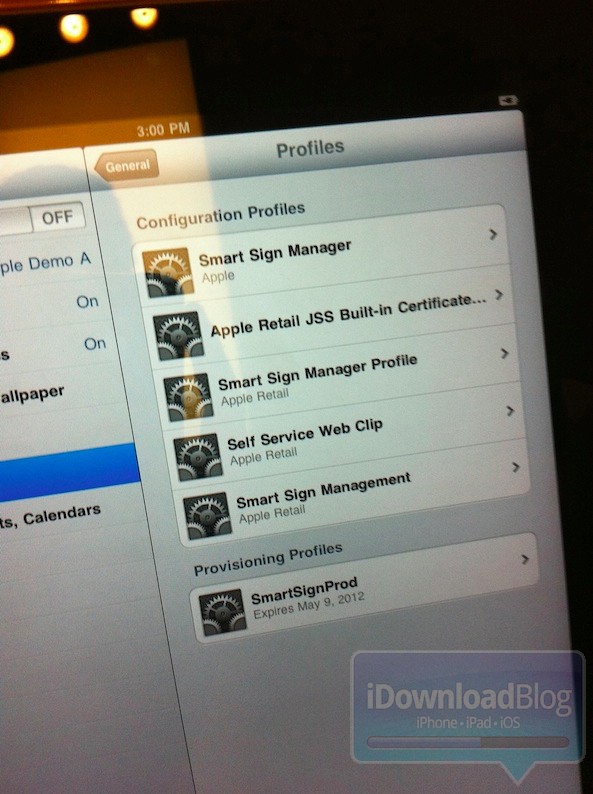 Zech of iDownloadblog recently visited his local Apple store with mission, “to get an inside peek at what was behind Apple’s own Smart Sign application.”

The thing about these Apple store iPad displays is that the Smart Sign app can’t be exited like any other app. There’s actually a secret gesture that must be performed to close Apple’s own marquee-style Smart Sign app to see the iPad’s homescreen.

While Zech didn’t reveal the super-secret gesture on iDownloadblog, he was able to exit the Smart Sign app and see the differences between the iPad display units and the average, run-of-the-mill iPads you can buy for 500 bucks.

“First off, there is no App Store. I was confused for a bit, and checked the Settings app to see if it was disabled, but it was no where to be seen. Next, Apple requires 6 profiles to be installed just for the app to work, which I found interesting. Besides that, the front facing camera doesn’t work either. In the Camera app, it shows a black screen.

Additionally, the app only works in the Apple Store. It shows up in Location Services (as seen above), and if you disable it, the app will crash immediately after opening it. Furthermore, when you do the secret gesture, the iPad will restart for some odd reason. Also, a new application also appeared by the name of “Self Service.” Unfortunately, I was running out of time, so I didn’t get to see what the app does.”

The lack of an App Store is obviously to prevent any buying sprees or unauthorized downloads, but we’re curious about Self Service. Is it a diagnostic, clean wipe program, or something more interesting? Give us your ideas in the comments.