Well, here’s an interesting little factoid: with $76.2 billion in the bank in cash as of the June quarter, Apple now has more money than the gross domestic product of almost two-thirds of the world’s countries… and more than the GDP of the world’s fiftiest poorest countries combined. 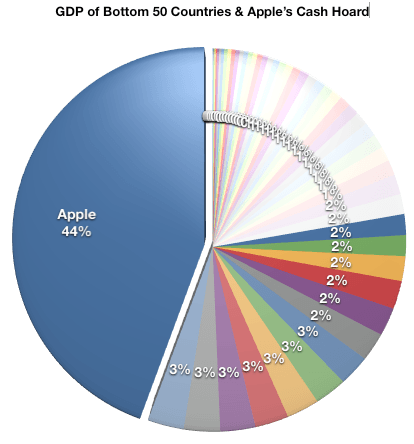 However, don’t put too much stock in those numbers. For one, Apple’s numbers for 2011 are being compared to the GDPs of countries from way back in 2009. For another as MacObserver notes, GDP isn’t really equatable to cash on hand: a company’s annual revenues is a better comparison.

Even using annual revenues as a metric, though, Apple’s 2011 earnings would only cause it to drop to the world’s 135th wealthiest country. Unbelievable. Thanks to Mac Observer for the awesome info!