Photographer Russ Croop used his fingers and app NetSketch to create what may be largest iPhone drawing to date, a portrait of his Boulder, Colorado living room. At 72 pixels per inch it measures 85.579 x 70.931 inches, or about 7 feet by 6 feet. (NB: full-sized version on his site.)

The super-sized sketch created some problems, however.Croop couldn’t upload the drawing to the NetSketch site to share with the community — his iPhone kept crashing.

“I felt like the guy who built a boat in his basement and couldn’t get it out because it was so big,” Croop told us.


He contacted NetSketch creator Ben Gotow, who agreed to help. Croop extracted the file from his iPhone backup on iTunes and sent it to Gotow via yousendit. Gotow sent it to back to Croop who was then able to open it in Photoshop. 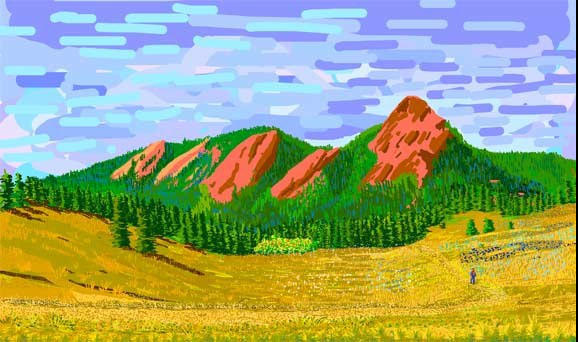 “I’ve made great 20″x30″ posters with some of the smaller drawings, so I would love to make some really gigantic prints with the large files.”

We’ve had our eye on Croop’s iPhone work and his quest to get into galleries, so we asked him  what would an iPhone art show look like?

“I envision big flat screen TVs replaying the paintings (videos of them as they’re made) and iPhones attached to walls or kiosks where people could try out drawing on them.”

Maybe a collective show would be the ticket. Croop adds,”There are some amazing iPhone artists out there.”