Mike Daisey isn’t afraid to rant. The mercurial storyteller first made a name for himself on stage by decrying the state of American theater. Tech is a natural target for him – he’s survived a stint at Amazon.com and takes apart computers to relax – so he really makes his point forcefully with a two-hour monologue called “The Agony and The Ecstasy of Steve Jobs,” onstage now through Feb. 27 at the Berkeley Repertory Theatre. (See our review of the show here.)

During our 40-minute conversation, I get the uncomfortable feeling he’s ranting directly at me. In fact, the show takes tech journalists to task for being subservient to the industry as well as missing the whole story of where all the shiny gadgets we report about so breathlessly come from. Ahem.

Cult of Mac talked to Daisey about why both Apple fans and PC people will enjoy his show, as well as his own gadget gear and why donning Steve Jobs’ signature black turtleneck on stage would’ve been “fucking stupid.”


Cult of Mac: What should an Apple fan expect from the show?

It’s a direction that I certainly didn’t think about until I began to investigate the process by which the devices are made, the circumstances they are made in and where they come from.

Despite all this time effort and attention, I never really thought about how exactly they were made, so for me this was a revelation that I outline in the show. I suspect that for someone coming from a place where they know a lot about the devices it will be a big revelation, too. 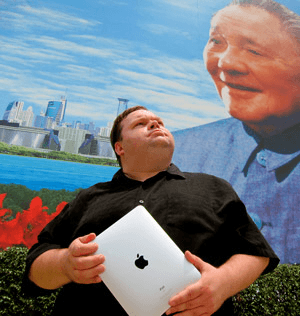 MD: It’s about where all our devices come from, really…(Factoid from the show: Foxconn makes 52% of all electronic devices – so if you piled every appliance in your house together and cut it in half, that’s about what emerges from that factory complex).

So to understand computing, you have to understand the path of Steve Jobs…Even if you are not religiously devoted to Apple, I would think it would still be engaging for you even if there is a certain degree of religiosity.

CoM: Where would you put yourself on the Apple fan boy scale?

MD: I don’t know, it depends on how you define “fan boy.” (My) level of care and devotion to the devices and what they are is very, very high. At the same time, the whole process of the show has taught me to cast a critical eye over the electronics industry in a deep way.

I’m also very unafraid to say what everyone knows is true, which is that Steve Jobs is fundamentally is two things woven together inseparably: he is a visionary asshole. Those two things can’t be taken apart.

There’s a lot there for people who are devoted to different aspects of Apple, on the other hand, it’s not an easy ride.

CoM: Did visiting factories in China change your habits, in terms of buying gadgets or keeping them longer?

MD: Yes, it did. Fundamentally, I have had only one hobby in my life and that’s technology. I work very hard and what little free time I have, I spend it on technology. I’m a pretty dedicated amateur.

A lot of Mac devotees do, we live it, we spend a lot of time on our gear and learning about exactly how it works – the interface and the design and everything.

But it changed my relationship to all my technology, it basically broke my heart.

I don’t have a system where now I am not buying new technology and I haven’t made vows to not buy new technology, but I can no longer view it the same way.

It no longer has the same carefreeness as it had before I personally witnessed what the cost is in human terms. It’s not possible for me to enjoy it in quite the same way.  And it does change how I’ll be thinking when I need to upgrade something…

CoM: What Apple gear do you own at the moment?

MD: I have a 15′ MacBook Pro, I got it before I went to Shenzen, which is where it came from. I have an iPhone 3Gs and a number of external drives and a conventional hard drive so I can carry around recordings of the shows and archives with me because I live on the road about 10 months a year. That’s my basic set-up.

MD: I have an iPad, I didn’t take it on the road with me because I don’t know what to do with it…It’s a lovely machine, a great device, but aside from looking at pictures on it – it’s amazing for that — I just couldn’t justify bringing it along.

Cult of Mac: Your monologue isn’t scripted, but did you change the direction after Steve Jobs announced he was going on medical leave?

MD: Steve’s announcement kind of punctuates the current situation. The Apple that was – the hobbyist company I associate with The Steves (as in Steve Jobs and Wozniak), the openness of a company that has its heart in the Apple 1 and shipped the circuit diagram along with the actual circuit boards — that company is dead.

The company that’s here now is a very different beast. It’s built on sleekness, on a kind of brutal industrial design, a beautiful sharp-edged elegance and about controlling the user experience completely. It’s not the same company, although you can love both of them.

Fundamentally, that was Jobs’ vision. Remaking that company into the form that it now has. This is the end of the era, the era of these huge personalities and Jobs is the largest of them…

Tim Cook might be a wonderful person to lead day-to-day operations, he’s certainly done it before, but there’s not going to be a show called, “The Agony and the Ecstasy of Tim Cook,” and there’s a reason for that. It’s because Steve Jobs is a visionary who reshaped the world to his liking and that is a rare, fantastical thing…

His announcement doesn’t change the show, but it does change the context that everything is heard in, our awareness of where all this sits in history.

CoM: You don’t “play” Steve Jobs in the show, but I have to ask: were you tempted to wear a black turtleneck in this? There’s a kind of a 1984 Apple commercial vibe going on with the set.

MD: No. That would be terrible, it would blur the line. It’s already sort of depressing to me, although it is understandable, that every time something is posted on Cult of Mac, someone comments that I do not look like Steve Jobs and wonders why am I not wearing a turtleneck…

Let’s be clear: a show where I played Steve Jobs every night would be really, really fucking stupid. A stupid-bad, really crappy show. So I don’t do that. And it never crossed my mind to do it.

What I am interested in is telling an extemporaneous story live. I am not playing any role. I’m using the tools of the theater, but I’m actually speaking as a person who has gone and done these things. That’s what it’s about.