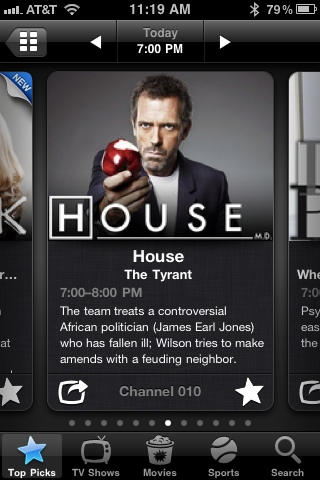 And it’s got a star-studded development team backing it up. Core members of the original iTunes team helped create Peel’s interface, and a team that beat Netfilx’s movie-suggestion algorithm in a competition worked on Peels innards.

We played around with the app a little, and here’s a quick run-through:

The app starts off with a simple setup process by asking the user to input TV source details, rough personal info and then rank viewing preferences. Suggestions are then fine-tuned by ranking favorite shows with star. Pretty simple.

The interface is bright and glossy, easy to navigate, and somewhat Apple-ish, with its row of menu icons lining the bottom of the screen. Of course, as with anything these days, it’s also connected to Facebook and Twitter.

And it works as advertised, for the most part; although trying to navigate to a different day seems hiccupy. The biggest issue comes from a side-effect of the app’s slick, focused interface though — will the app make the user miss shows here and there because it somehow fails to present them as options?

We’re not done yet, though — tomorrow, we’ll have excerpts from a conversation with Peel’s VP of marketing, Alec Marshall, and a clue about the direction Peel may be headed.