iOS 9 adoption has ground to a halt, remaining static at 77 percent, according to Apple’s latest developer figures.

This is the exact same percentage of iOS 9 users as last time Apple published its adoption figures, on February 8 — and just 1 percent growth from this time last month. Meanwhile, 17 percent of users are running iOS 8, and 6 percent are still using an early version of Apple’s mobile OS. 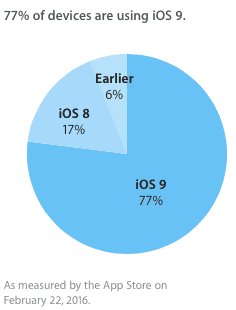 The fact that adoption would remain static might sound disappointing given that iOS adoption usually climbs steadily until it is in the high 80 percent range, just prior to the launch of the next year’s version.

It’s still far more impressive than Android, however, which suffers from hopeless amounts of fragmentation. By comparison, the latest version of Android — Marshmallow — has a tiny 1.2 percent adoption rate.