71 percent of iOS users are using the latest version of the mobile operating system, according to stats released by Apple. Measured by visits to the App Store this week, the stats also show 21 percent of users are running iOS 8, while 8 percent are running previous versions of iOS. 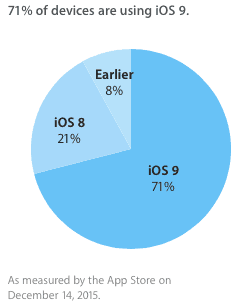 While that’s only a slight increase on the 70 percent who were running iOS 8 a fortnight ago, it’s still a big improvement on iOS 8, which took until late January to hit a mere 69 percent.

It almost goes without saying that it’s also way more impressive than Android, which has only managed to hit 36.6 percent for its most popular version after more than two years.

Given that Apple is likely to have a very, very strong festive season it’s likely that iOS 9 will have a boost over the next couple of weeks — and will eventually max out in the high 80 percent range next year, prior to the launch of iOS 10.

Apple most recently released iOS 9.2 to the public, adding a variety of bug fixes, along with significant tweaks to the Safari View Controller to allow Safari to run natively within third-party apps.