Samsung is expected to unveil its new flagship Galaxy S6 smartphone at Mobile World Congress next month, but some leaked images from the XDA developer forums might have just spoiled their big reveal.

The set of images of an alleged Samsung prototype show is a big departure from the other Galaxy devices with rounded edges that make it look more like the iPhone 6. The bottom of the leaked Galaxy S6 looks almost identical to the iPhone 6 bottom.

Here’s the bottom of the iPhone 6 for comparison:

In defense of Samsung’s design team, I’m sure they would like us to point out that they’re totally different. You see, they innovated a second a speaker row and added four more holes than the six on the iPhone 6. The antenna joints were also moved to the middle, and the ambient mic sensor is thrown in between the speaker and mini-USB because it’d look more Samsung-y than the iPhone.

The front and back of the phone look more like the traditional Galaxy. The XDA forum member who posted the pictures says it came from AT&T, but it could just be a prototype model, with the final version sporting a more refined look.

“Can’t say where it’s from but it’s from AT&T directly. Obviously a prototype or test model and it says not for sale on the package. Obviously a Samsung phone, I was scared to play with it much but seems a glass back and front with metal on the sides.” 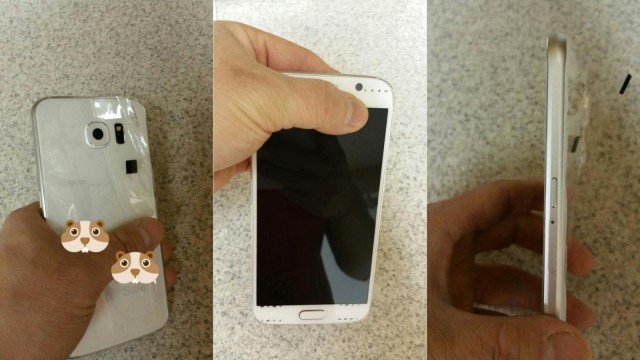