Apple appears to have acquihired the small team behind Pin Drop, a location-bookmarking app set to close down at the end of the month.

Based on redacted information, Cult of Mac has reason to believe that at least some members of Caffeinehit, the London-based development team behind Pin Drop’s iOS and Android apps, will soon be part of Apple’s iOS engineering team.

Apple has been improving its Maps app consistently ever since launching it two years ago. A directory for small businesses to add information in Maps was just made available, and Pin Drop’s system for collecting pins could be baked into a future version of Maps.

There’s always the chance that Apple wants Caffeinehit’s members for less obvious reasons, too. Like other big technology companies, the Cupertino giant frequently buys startups on the sly to acquire core technologies or talented team members.

How Pin Drop works, and why it’s shutting down 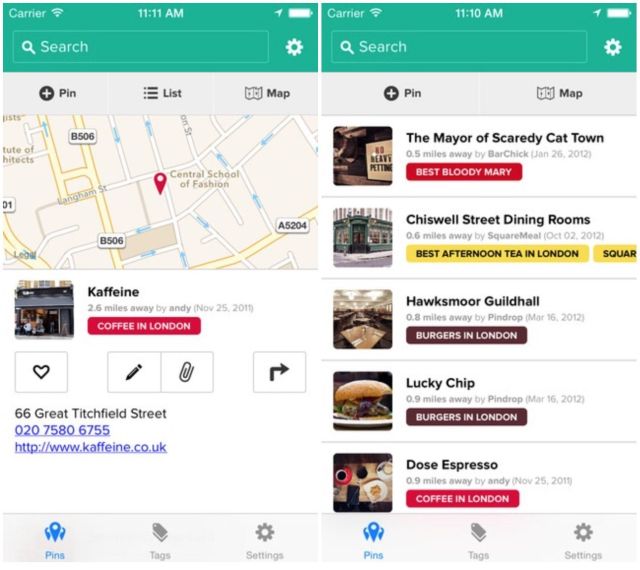 Pin Drop allows users to collect specific locations in a simple interface by dropping pins on a map and adding tags. Launched in 2011, the app has been pitched as a tool for activities like itinerary planning, location scouting, sales tracking and property management. After taking off in the U.K., Pin Drop was made available in the U.S. in August.

In a post last month, Caffeinehit and Pin Drop founder Andy Ashburner explained that a lack of funding was the reason for the app’s demise, and in a follow-up post this morning, he announced Pin Drop’s official shutdown. “I had my fingers crossed for a miracle but sadly it never materialised,” he wrote, “so it’s with a heavy heart that I have to announce Pin Drop will be closing down on Friday 31st October 2014.”

And then things got interesting for Apple watchers.

My biggest concern was making sure that the core Caffeinehit / Pin Drop team (Tom, Giacomo, Donal and Andrea) got jobs. I’m happy to say they’ve all been snapped up and have (rightfully so) landed themselves dream jobs. Super proud of them all and excited to see how they’re going to change all of our worlds in the future.

One of those developers, Giacomo Saccardo, said on Twitter today that he now works for Apple, but the tweet has since been deleted.

The developers behind Pin Drop previously made Summly, the news-summarizing app that was bought by Yahoo in March 2013.

You can find Pin Drop in the App Store until October 31.

Apple and Caffeinehit didn’t respond to requests for comment.