Genre-bending drama Swan Song heads for Apple TV+
Save $300 on Mac, $1,000 on Mac software [Deals & Steals]
Use the hidden autocomplete in Apple Watch’s Scribble to send text messages
Apple seeks dismissal of Servant plagiarism lawsuit
Get all the video tools you need in one app [Deals]
Today in Apple history: Photoshop debuts as a Mac exclusive
Larry Tesler, the Apple employee who invented cut, copy and paste, dies at 74
Lockdown Firewall now safeguards your Mac
watchOS 6.1.3 brings a heart-related bug fix
Yes, you can still take photo bursts with iPhone 11. Here’s how.

Given how constrained supplies of the iPhone 6 Plus have been, it should come as no surprise that Apple’s biggest smartphone isn’t being used the most right now.

While Apple won’t say how many of each model it’s sold, mobile analytics data shows that iPhone 6 sales are outpacing 6 Plus sales more than seven to one. 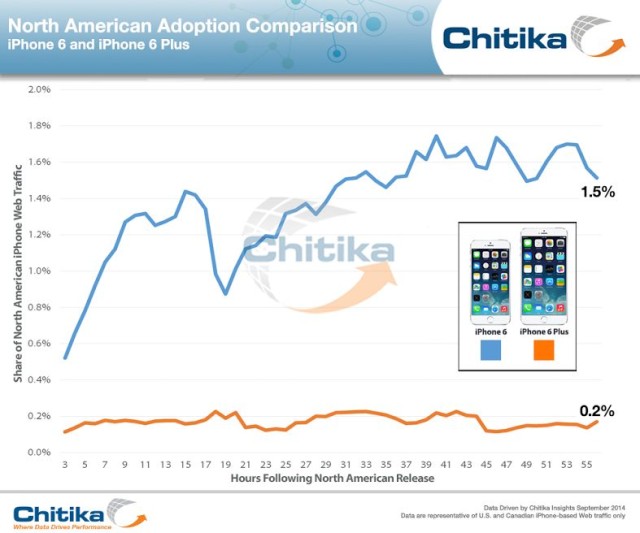 North American ad impressions recorded by Chitika show the iPhone 6 accounting for 1.5% of web on Monday, while the 6 Plus only represents 0.2%. That’s quite a difference, and it reflects reports that the 6 Plus only accounted for 2-3% of Apple’s launch inventory.

Not definitive numbers by any means, but they’re certainly indicative of how few 6 Plus models are out in the wild. Apple still isn’t selling its new iPhones in China were demand for the 6 Plus is expected to be the highest, so that likely factors into sales. Supplies are also severely limited in the U.S. and other launch countries.

Leave a comment
Posted in: News Tagged: iPhone 6, iPhone 6 Plus