Right on the heels of iOS 7.1.2, Apple has released an update to OS X Mavericks in the Mac App Store. Version 10.9.4 of Mavericks features a fix for a bug many have been experiencing related to Wi-Fi connectivity.

There has been a known problem in OS X that keeps some Macs from automatically connecting to Wi-Fi after being woken up from sleep. Apple has addressed the issue in 10.9.4 along with general reliability improvements for waking from sleep. Safari 7.0.5 is also included.

I’ve been dealing with the Wi-Fi problem on my Retina MacBook Pro for a long time. Whenever my Mac is woken up from sleep, I have to manually connect to my Wi-Fi network instead of it automatically connecting like it’s supposed to. I’m glad to see that I’m not alone and that Apple has finally fixed the problem. 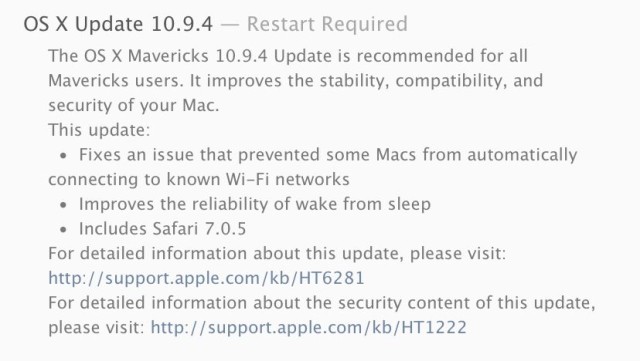 OS X Yosemite is launching in the fall with a new design and a ton of new features. Those of us still waiting on Mavericks should head on over to the Mac App Store and install today’s update ASAP.