Hundreds of new games come out every week in the App Store. A select few are the next must-play title that everyone will be talking about for the foreseeable future. Most of them are perfectly decent but may not receive the attention they deserve. And then you have the third group: games so odd, bizarre, and head-scratching that you’re not sure what to make of or do with them.

Here are some of the strangest games to drop into the App Store this week, and they’re all weirdo versions of other titles. What you do with this information is between you and your iPhone. 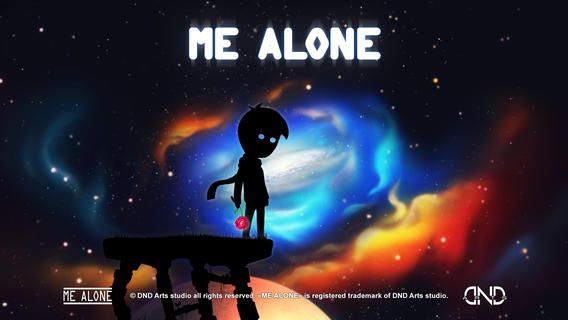 Developer Playdead’s Limbo came out in 2010 for the Xbox 360, PlayStation 3, and PC, and a lot of people loved it. I was one of them; it’s a creepy, mysterious, genuinely scary game. And it has a great and distinctive silhouette art style that let the developers show you what was chasing you while leaving just enough to your imagination to keep it terrifying.

Me Alone, which came out this week in the App Store, borrows it. Completely.

It could still be good; you’re a kid running through a nightmare realm with spooky monsters. The roses are a little weird, but hey.

Choice quotation: “Lonely boy on a dark planet fights his nightmares. The only friend of his is a defenseless yet beautiful rose.”

Ain’t Nobody Got Time to Tap the Wrong Tile – Free | Appnoxious, LLC 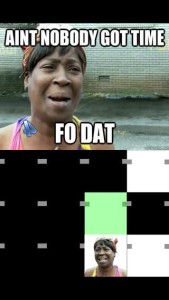 I’m going to go out on a limb, though, and guess that Ain’t Nobody Got Time to Tap the Wrong Tile, which combines the gameplay of Don’t Step the White Tile and Piano Tiles with the casual racism of an Internet meme, is not all that good.

You know the drill: Tap the white tiles while avoiding the black tiles. And then apparently Sweet Brown, the lady from the TV interview about the apartment file, pops up and does … something.

I have no idea what she has to do with tapping one color of tile and avoiding a different color of tile. It’s a damned mystery. Plus, that joke is like two years old, so it all just looks crazy.

Side note: The word “tile” has officially lost all meaning.

Choice quotation: “AIN’T NOBODY GOT TIME TO TAP THESE TILES!” 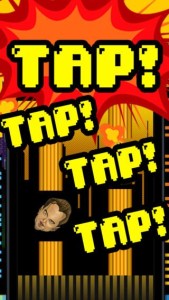 This Flappy Bird clone, which is high in the running for my favorite game title ever, puts you in control of the head of actor Leonardo DiCaprio of Titanic and The Departed fame. Your goal is to tap to guide the floating dome through a series of obstacles on its long-frustrated quest for the elusive Oscar statuette.

It’s a noble aim that has frustrated the acclaimed actor and his head for far too long, and it’s up to you to help him out.

Except that it’s like Flappy Bird. And Flappy Bird never ends. So maybe it’s a metaphor for the futility of endlessly pursuing material objects and obsessing over the validation of others. A Flappy Rio Leo 2: The Adventure of Tiny Flying Smash Boom has a message for us: that work is its own reward, and it is not the destination that offers us gratification, but the journey.

Because life is a quest on which we better ourselves, and success is not measured in golden statues but in personal dignity and service to the human race, and true immortality lives in the memories of others.

This game just incepted me.

Choice quotation: “Out of all the Flappy games, we believe we have the best graphics. While it wasn’t our goal to go out and create Flappy Bird 2, we wanted to improve the overall user experience.” 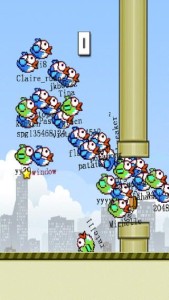 Flying Bird MMO looks like one of the most insane games I’ve ever seen. It’s a pretty straight-up copy of Flappy Bird, but it has an interesting twist: You’re playing simultaneously with other people.

A lot of other people.

Because apparently Flappy Bird isn’t hard enough as it is. Can you even imagine how this works?

This game actually looks pretty hilarious. I might just enjoy watching videos of it.

Choice quotation: “The online fly bird is on ios now.You can control fly bird flying in sky with many other players.”