It has been nearly three months since Facebook launched Paper for iPhone, a cutting-edge experiment in what it means to use Facebook. Today Paper received its first big update in the App Store, and a few of the elements that were stripped out of Facebook in the original release have been added back.

Birthdays and events are now tucked away within Paper’s notification window. Swipe down past your most recent notifications to see upcoming events and birthdays. Another addition is the ability to add photos to comments via a new camera icon next to the comment text field. 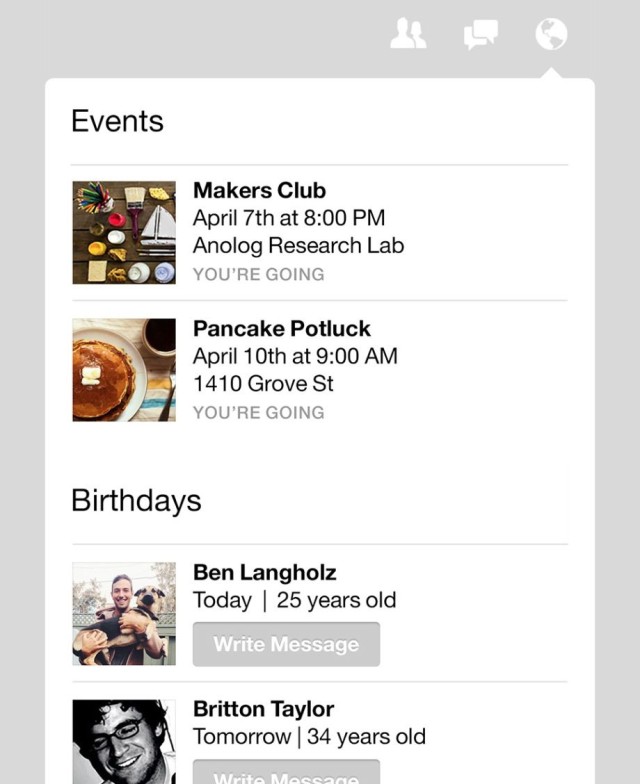 Groups you are a part of have been given more prominence. Swipe up on the screen to access search, tap the button on the top right, and a list of all your groups is displayed with the number of notifications you waiting have in each one.

Besides its bold design, Paper is very different from the main Facebook app in that it curates news from different categories like “Tech,” “Ideas,” and “LOL.” More custom tile covers for publications like Bloomberg News, Mashable, FT, kottke, and Fox News have been added.

Noticeably absent from today’s update is the “Nearby Friends” feature Facebook announced yesterday. Although Facebook plans to gut messaging from its flagship app and make people use Facebook Messenger, messaging won’t be leaving Paper anytime soon.

Updates to the main Facebook and Messenger apps also came out today. Paper is free in the App Store.