Maybe it’s just me, but I’ve never had a problem with storage on my iPhone. I run a middle-of-the-road iPhone 5 with 32 Gb of space on it, I load a ton of games and take a lot of pictures with the thing, and I rarely worry about running out of space.

I do, however, continually run out of battery life. The Mophie Space Pack has both issues (or non-issue plus issue, it gets confusing) covered with both a kick-ass extra battery power feature and a extra 32 Gb of space feature. The Space Pack works with a neat little app called, appropriately, Space, which definitely gets the job done.

I’m just not sure it was a job that needed doing.

Don’t get me wrong, doubling both the battery life and the storage capacity of my iPhone is a fantastic thing on the surface of it. The Mophie Space Pack is a decently light, protective storage case with an easy to use battery charging system. Simply plug in the Space Pack while on your iPhone and it’ll charge your iPhone first, then itself. The Space Pack gives me just a bit over a whole second charge for my iPhone, essentially doubling the amount of time I can go without plugging it in.

Still, the Mophie Space Pack is the most elegant solution for any battery life or lack of space issues you may have. 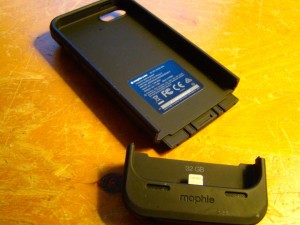 The Space Pack is two pieces, easily yet snugly sliding onto the bottom and top of your iPhone There are four lights on the back of the lower piece. These indicate the battery power left in the Space Pack, and will light up when you press the brushed aluminum button to the left of the lights. There’s also an on/off switch to the right, letting you keep the battery power for when you really need it.

The case is well put together, with buttons for the volume, sleep/wake button, and mute toggle switch that work as well as the ones on your iPhone itself. The case adds a bit of thickness and weight, but it’s well worth the trade-off, especially when you need that extra battery boost for a busy iPhone usage day.

The camera and flash are given their own cut out area on the rear of the case, and the headphone plug, while incredibly recessed due to the design of the case, is easily accessed with an adapter that comes along with the Space Pack. Sure, it’s another thing to keep track of, but it’s usable, for sure. 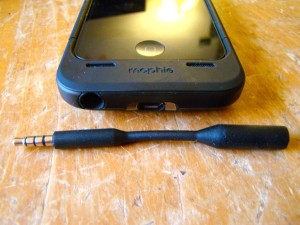 The extra 32 Gb of space is accessed either on the iPhone or via your Mac, while plugged in with the micro-USB charging cord, which resides in the same place as the Lightning connector on your iPhone. To access the stuff within the Space App, you simply press that aluminum button on the back of your Mophie; the app will bloom with all sorts of ways to manage your stuff.

The Space app is free in the App store, and it’s really pretty great. The app organizes any files you drag on to the Space Pack via your Mac into folders for Photos, Videos, Music, Documents, Other Files, and All Files. There’s an indicator for the battery life left in the Space Pack, and a running total of how much stuff is in your Space Pack, via a bar along the bottom of the app screen. You can tap the Battery indicator on-screen to see a handy pie chart representation of how much stuff–and what kind of stuff–is onboard. 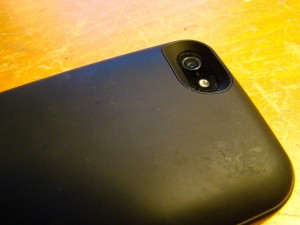 There’s a great Camera Roll sync function, too, that pulled all the photos off my iPhone and into the Space Pack. It’s a great backup, and I find it comforting to know that, in addition to my Dropbox sync, I have a second redundant copy of my iPhone Photos with me at all times.

Having this kind of extra space makes a lot of sense, intellectually. You’ll not need to rely on network services like iCloud or Dropbox as much, and you don’t need to manage your space on your iPhone as carefully, especially if you have a smaller capacity device. I do like the idea of storing things on the Space Pack that I wouldn’t necessarily want to put up on a cloud service.

If you want to keep a lot of movies on your iPhone, say, for those long flights, the Space Pack is ideal. You’ll be able to watch them right within the Space app itself, and the extra battery life will keep you in Hobbits or whatever you fancy for hours and hours. 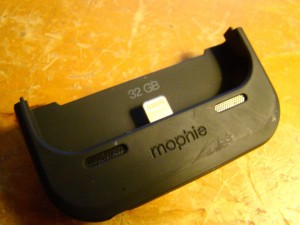 The issue here, for me, besides maybe the matte finish on the black Space Pack unit I reviewed that seemed to pick up all sorts of dust and cruft, is that I’ve already solved the space issue with Dropbox and Google Drive. I don’t carry around much music at all, thanks to services like Rdio and Spotify, which allow for offline access to songs, as well, with a little bit of effort.

If you haven’t, though, and you need to keep your iPhone well-fed with power, the Mophie Space Pack is the most elegant solution I’ve seen, giving you the answer to any battery life and lack of space issues you may have. The case is well-made, the app works as advertised, and–despite a little bit of thickening and heaviness–you’ll easily integrate the Space Pack into your iPhone life and workflow.