A new Apple patent awarded this week by the U.S. Patent and Trademark Office suggests future MacBooks could be powered by the sun. In its filing for an “Electronic device display module,” which was first submitted back in 2010, Apple describes a notebook with a double-sided display that has photovoltaic cells on its back for solar charging. 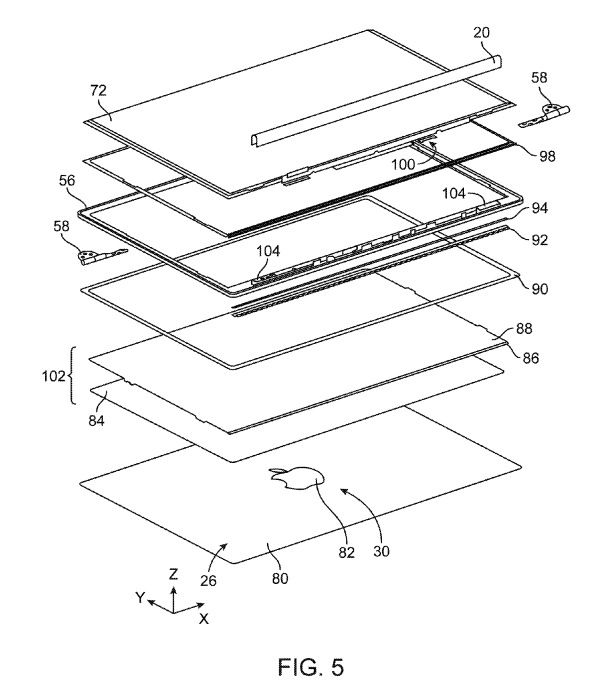 The double-sided display may be formed from glass, ceramic, metal, fiber composites, or plastic, Apple says in its filing. “When formed from a material such as glass, the rear plate may be transparent and may allow light to pass through the rear of the housing.”

Apple even suggests using electrochromic glass, which could allow light to pass through only when it’s needed, and block it out when it’s not. The company describes how the glass could be divided up into multiple sections — such as halves or quarters — which could them be adjusted individually depending on the strength of the light required.

Apple also describes how touch-sensitive controls could be integrated into the rear-facing display using capacitive, optical, and acoustic touch technologies. This could allow users to control certain aspects of the machine, such as a passcode security lock or media controls.

The notebook would still have the famous Apple logo on its back, and it will still light up just like it does on current MacBooks, but it may be illuminated using the same LED lighting that’s used for the display.

Unfortunately, Apple patents are never a guarantee of things to come, but solar-powered MacBooks certainly sounds like a terrific idea. Who wouldn’t want a notebook that could continually charge itself while you’re working on the go?