Steam Punks likes Mega Man, and hopes you do too. Even the description of the game on the App Store says it was inspired from games like Mega Man X. And, boy, does Steam Punks play like a Mega Man game!

You’ll jump, you’ll shoot, and you’ll take out curiously Capcom-like, steam-powered robots in your effort to save kidnapped scientist Professor Clout. You play as Dunns Callahan, an Elite Enforcer assigned to protect Clout. Clearly he doesn’t do a very good job of it as the Bowler Gang easily abducts the professor off a moving train. 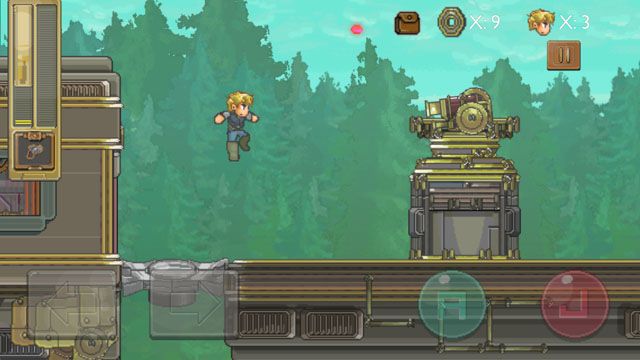 Dunns’ jump animation is very much like Mega Man‘s, and he can also gain new weapons, abilities, and armor that turn him into a steampunk representation of The Blue Bomber. He even has a power meter for his weapons and life bar.

Overall, Steam Punks is a pretty enjoyable crack at this style of platformer, but it isn’t perfect. Perhaps it’s just me, but I found it much more difficult to make myself switch from jumping to firing when using a touch screen. Since all the enemies fire at Dunn at about chest level, you’ll have to overcome this hurtle to make any progress. Even if you do, some enemies will fire at you from off screen, making it difficult to time your next jump. 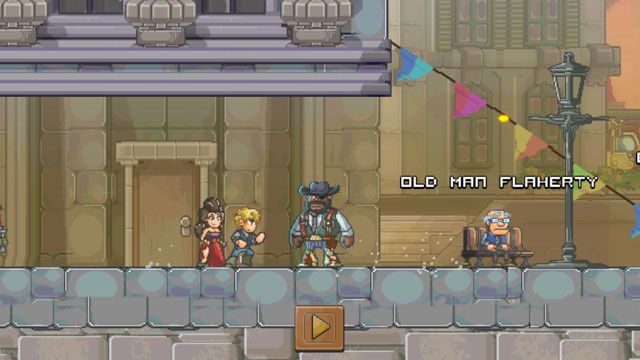 What Steam Punks gets right is automatically saving at certain points in the levels, which makes coming back to the game much more enjoyable. Plus, the art is a complete joy to look at. The Super Nintendo games that inspired Steam Punks wish they looked as colorful as this.