I have a bit of a soft spot for Loop Attachment’s Mummy cases; I’ve reviewed them for iPhone 4 and iPhone 4s, iPhone 5, and the iPad mini — and I’ve loved them all. But the collection wasn’t complete without the Mummy case for the full-size iPad, which went on sale back in August.

Like its siblings, the new case is made from a soft coated silicone that is designed to protect your iPad from any dings, drops, scuffs, or scratches that it might encounter while you’re using it. But it’s not just a plain old silicone case — the Mummy is different.

The thing that sets it apart from the cheap silicone cases you’ll find on eBay for a few dollars is that it has a special coating that not only makes it super soft and smooth, but also prevents it from collecting dirt and grime. It also has a unique design that shows off the Apple logo on the back of your device.

Furthermore, the Mummy is compatible with your Apple Smart Cover, which isn’t a common trait with third-party cases. So not only does it protect the back of your device, but with the help of your Smart Cover, it protects its Retina display, too.

The Mummy for iPad is priced at $40, and it’s available in black, blue, graphite, red, white, and my favorite, teal.

What I love most about the Mummy case is its focus on protection. I’ll happily hand my iPad to my kids while it’s in the Mummy case, safe in the knowledge that if they drop it on the kitchen floor, it’s not going to get damaged. Drops from a significant height may be a problem, but as long as you’re not too careless with your device, the Mummy will keep it well protected. 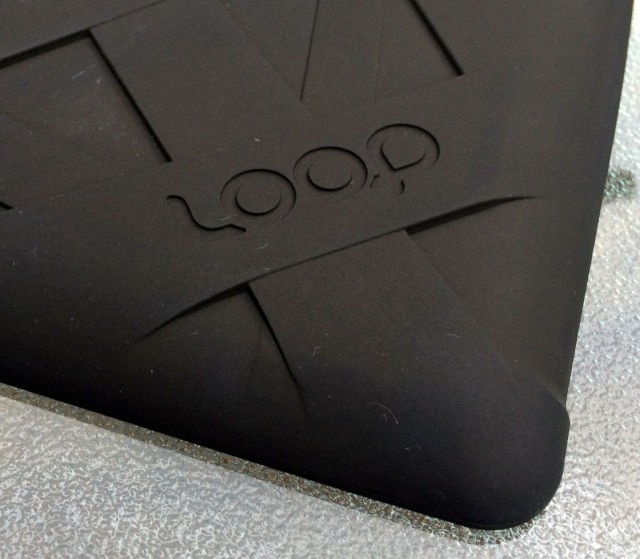 The Mummy covers a large portion of your iPad’s front bezel, which provides some protection for its display. It should be more than enough to prevent it from getting damaged if it lands flat on its face, but for added peace of mind, you can combine the Mummy with a Smart Cover.

They work wonderfully well together: The built-in magnets in its side hold the Smart Cover surprisingly well — so don’t worry about it falling off — and you get all the protection of the Mummy with the added benefits of a Smart Cover, like the stand for typing and watching movies.

The Mummy’s unique, textured design feels great, and provides you with plenty of grip, and shows off the Apple logo on the back of your device. There’s plenty of protection around the logo to prevent it from getting scratched, however.

Due to its focus on protection and that thick, high-quality silicone, the Mummy makes your iPad feel a little bulky — particularly if you do decide to use a Smart Cover at the same time. It feels noticeably thicker in the hand, and it takes a little while to get used to. If you need this level of protection, however, this is something you should expect. 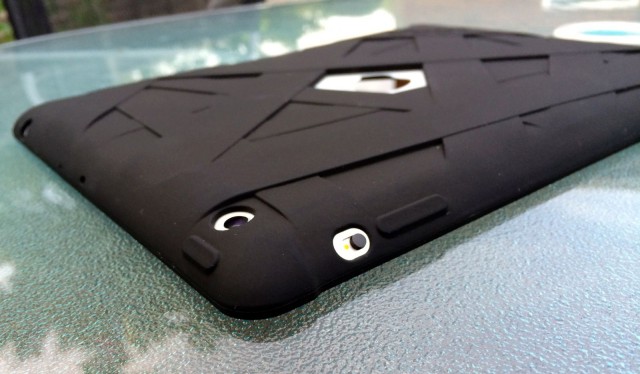 I should also note that the Smart Cover functionality isn’t quite perfect. The Mummy has magnets in its side, and a large one in its back. That means the Smart Cover stays attached to your device, and sticks to the back of your iPad when you want it to stay out of the way.

But there are no magnets in its front edge, and the silicone impedes the Smart Cover’s contact with the magnets inside your iPad — which means the Smart Cover has a tendency to flip open all by itself when the iPad isn’t sat flat on a surface. It also means that there’s a chance the Smart Cover will leave your display exposed when you drop your device, but again, the Mummy itself should still protect its display from damage.

Most silicone cases have a nasty, sticky feel to them, and they collect dust, dirt, and other detritus as you use them. That’s not the case with the Mummy, which has a special coating that makes it super smooth — but it will still pick up some grime from time to time. Fortunately, because it’s silicone, you can simply pull it off and run it under some water to clean it off — after you’ve taken your iPad out of it, of course. 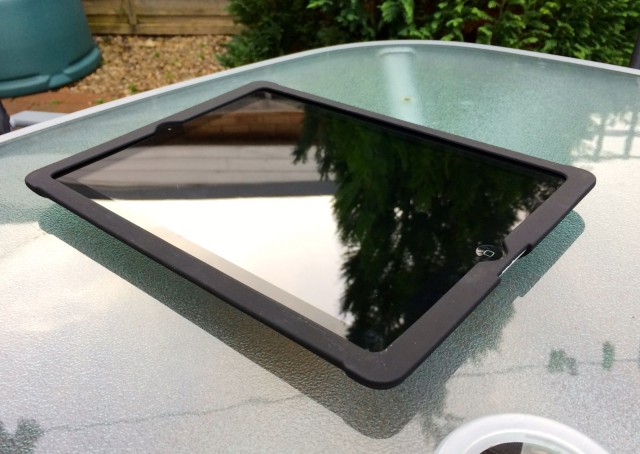 Having already reviewed the Mummy for iPad mini, I had high expectations for its big brother, and I wasn’t disappointed. It’s just as good as the rest of the Mummy lineup, and I still maintain that it’s one of the best silicone cases money can buy. It’s well made, it looks and feels great, and it’s protective.

The Mummy’s Smart Cover compatibility — although not completely perfect — is still a great feature, and it’s something that isn’t easy to find with third-party cases. This and its impressive build quality are what sets the Mummy apart from competing iPad cases.

If you want a simple, good-looking iPad case that will keep your device well protected, then the Mummy is well worth a look. It’s certainly worth its $40 price tag.