The Griffin IntelliCase for iPad mini is designed to provide you with all-over protection for your device without adding too much bulk and spoiling its sleek and sexy design. It combines a hard polycarbonate rear shell with a flexible, hinged cover that doubles as a stand for typing or watching movies, and its micro-textured surface promises to increase grip, making those nasty slips a thing of the past.

The IntelliCase clips onto the sides of your iPad mini, and it provides access to all of its buttons, ports, and cameras. It has “strategically-placed” magnets embedded inside its front cover that will automatically put your iPad to sleep when you close it, and then wake it up again when you open it.

The IntelliCase is priced at $39.99, and it’s available in black, red, black and gold, and blue and grey. I’ve been using it for the past two weeks to find out if it’s any good.

The IntelliCase couldn’t be easier to apply; you simply place it one top of the polycarbonate shell and then press it down until it clicks inside. It fits well, and it looks very nice, too. I’ve not overly keen on the lip on the back of the case, which holds the cover in place, but more on that later.

The strong hard shell on the back of this case will certainly protect your iPad if you drop it, and the flexible front cover should be just enough to protect the display, too — providing it’s not a big drop and the cover stays closed, of course.

The cover also serves as a stand, and it’s a very good one. It’s sturdy and stable, and it provides a good angle for typing on a flat surface. It feels a little flimsy at first, and I was worried that after ten minutes with the kids, it would be ruined. But after two weeks it still looks as good as new.

Despite that big plastic lip, the IntelliCase still feels pretty slim. You’ll certainly notice it’s there, of course, but it certainly doesn’t add too much bulk, or too much weight.

So, about that lip. It’s there to hold the front cover in place when you want to use it as a stand, but I was Griffin had found another way to do that. The lip doesn’t look good, it sticks out too much, and it doesn’t feel nice to hold, either.

I soon became used to it, but again, I wish it wasn’t there. The IntelliCase could be so much slimmer without it that it seems a shame that the lip has to be there.

Although the front cover looks nice and seems very strong, its magnets aren’t. If you hold the IntelliCase with its front facing the ground and shake it ever so slightly, the cover quickly pops open. I’d be worried that if I dropped my iPad, the cover would open up and leave its display exposed.

Unfortunately, that’s a problem with a lot of magnetic covers — but I’m happy to accept that over bulky claps or buttons. It all depends on whether size and weight or better protection is more important to you. 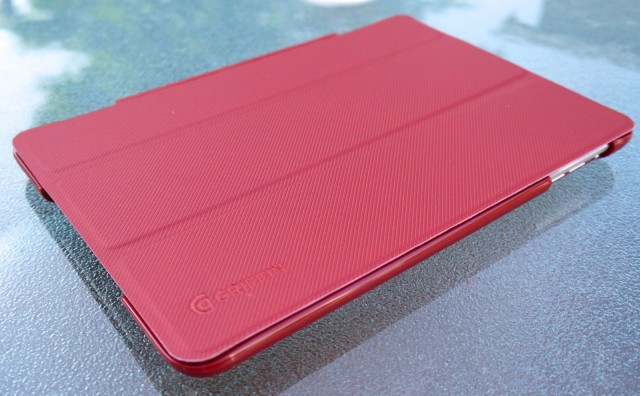 I think the IntelliCase is a very good-looking case — despite the lip — and it’s a good size. It could be smaller without that lip, but the lip does provide a very strong stand — and it holds the cover out of the way when you’re taking pictures with the iPad mini’s rear-facing camera.

The IntelliCase is certainly well worth a look — especially if you admire its snazzy blue and grey and black and gold designs, and you admire simple cases that stay out of your way while you’re using your device.