The BookBook from Twelve South has long been the best and most luxurious leather wallet case for iPhone, but it has a new contender from Acase that wants to steal its crown. It’s called the Collatio, and in many ways, it’s very similar to the BookBook.

As well as holding your iPhone 5, the Collatio holds up to three credit cards, and features a larger pocket for bills, receipts, and anything else you’d like to stuff in there. It provides access to all of your iPhone’s buttons and ports — though you will need to open it up to use the volume buttons and mute switch — plus its front- and rear-facing cameras.

The biggest difference between the Collatio and the BookBook, however, is the price. While Twelve South’s offering will cost you $60, the Collatio is just $40. But is it as good?

The Collatio is certainly just as pretty — if not prettier — than the BookBook. I’m actually a big fan of the BookBook’s vintage book look, but if you’re not, then that’s one point to the Collatio. It comes in brown and it’s made entirely from genuine leather.

The front and back covers are shiny, while the spine is a softer chamois-like leather. It looks smart and sophisticated and exactly how you’d like a leather wallet case to look. There’s a small Acase emblem on the bottom corner that I wish wasn’t there, but it doesn’t look too bad.

Inside the Collatio you’ll find three credit card pockets, plus a larger pocket for cash. You could probably cram more cards into those pockets if you want to, but it makes them harder to remove, so it’s easier to just stick one in each.

Your iPhone is held inside a leather frame that covers the sides of your devices, plus the bezels above and below the display — though the home button, speaker, and front-facing camera are left exposed. Nothing secures the iPhone in place, but the leather is tight enough to stop it slipping out.

The Collatio’s build quality is fantastic… a lot of care has clearly gone into its production.

On the back of the case, you’ll find one cutout for your rear-facing camera. It’s just about big enough, and I didn’t notice any reflection issues when taking pictures with the flash.

The Collatio’s build quality is fantastic. It’s made from high-quality leathers and a lot of care has clearly gone into its production. The sticking looks clean and tidy, and it’s super strong. The Collatio isn’t immune to a few scratches, but they add life to the case, and you’ll find a used Collatio looks better than a brand new one. 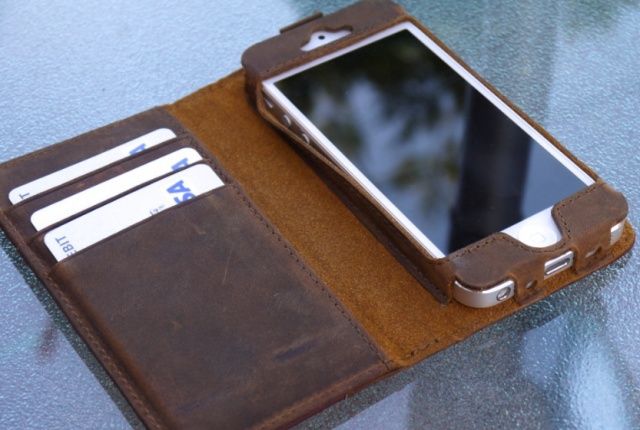 Although the Callatio stays closed on your desk, the front cover isn’t fixed down, so if you drop your iPhone there’s a chance it’ll flap open and leave your display exposed.

This wasn’t a major issue for me. Having magnets inside the case to keep it closed, or some kind of fastener, only adds bulk and weight and makes it harder to get to your device. But it’s something to bear in mind.

One thing that did bother me was the leather frame that holds the iPhone inside the case. It works well for the most part, but the cutout for the mute switch is nowhere near big enough — my mute switch is mostly covered up, and it’s really difficult to use.

In fact, I’ve gotten used to just folding the leather back at the side to get to the switch, but over time that’s caused it to stretch and go a little slack, as you’ll see from some of the pictures showing the inside of the case.

The other issue I had with this leather frame is that it’s not easy to get your iPhone out once it’s in there. There’s no pull tab like the original BookBook had, so you have to put your iPhone up from its base… only there isn’t really enough room to get your thumbs in there.

Removing your iPhone from the Collatio once it’s in there, then, is a bit of a struggle. I would have much preferred it if Acase used the same plastic housing that Twelve South used in its latest BookBook case. Not only is it easier, but it’s not as bulky, either.

I’ve mentioned before that I like iPhone wallet cases, and the Collatio is one of my favorites. It looks terrific, its build quality is great, and it does everything you want a wallet case to do.

I’d much prefer a plastic iPhone holder rather than a leather one, but then again, I think I’d happily live with the leather for the $20 saving the Collatio brings.

If you’re looking for a great leather wallet case for your iPhone 5, definitely check out the Collatio.