OMGPOP CEO Dan Porter has confirmed that a sequel to the smash hit drawing game Draw Something is “coming soon.” The first screenshot of the new title was posted to Twitter by none other than TV host Ryan Seacrest shortly before Porter made the news official.

“I somehow convinced them to give me #DrawSomething2 first,” Seacrest wrote.

Draw Something landed on mobile early last year, and it took just over a month for the title to see more than 35 million downloads on Android and iOS. It became a hugely popular title, and OMGPOP found itself being acquired by Zynga for a whopping $180 million. 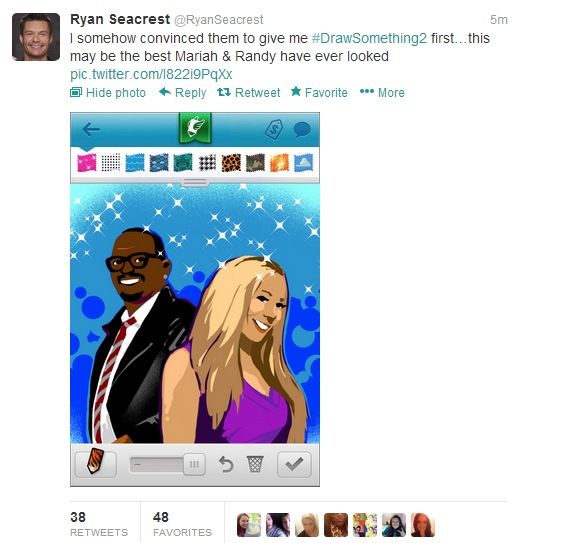 But it didn’t take long for the novelty to wear off, and shortly after the acquisition, interest in Draw Something began to decline. OMGPOP is now looking to ignite it again with a sequel, which has been designed to have more longevity then the original, according to TechCrunch.

Draw Something 2 will reportedly have a stronger social platform, and it will allow players to keep and show off their drawings to their friends. In the original game, drawings were lost after each round (unless you grabbed a screenshot), which was a shame for those who put a lot of effort into their sketches.

Fortunately, I wasn’t one of those players.

In addition to this, Zynga will be using celebrities to promote the titles. According to TechCrunch:

That’s in keeping with what Porter originally wanted to do with the game when he started exploring TV game show and transmedia opportunities. He has a long and unusual career in the music business and ties to the media world out of New York.

Zynga’s track record for sequels, however, isn’t great. While FarmVille 2 did pretty well, others, such as Mafia Wars 2 and CityVille 2, were flops. But the original Draw Something still has between 10 million and 20 million players a month, so that’s a strong starting point.