This is the Unu Enerpak Vault. It’s an excellent spare battery pack for any of your portable devices, and it is even powerful enough to almost (almost) charge the thirsty, thirsty Retina iPad.

But what it does the most (apart from get you out of pretty much any charging emergency) is show the amazing difference between the batteries inside out iDevices.

As you can see, the retina iPad has a battery almost an order of magnitude more capacious than the iPhone 5. And that’s what makes it so hard to charge. Plugging it into the wall is bad enough, taking hours even just to add a third of a charge. But despite this, the new 11,000mAh Enerpak manages to acquit itself quite well.

Draining this thing seems to be almost impossible

The spec sheet says that the Vault can charge an iPhone 5 around 2.5 times, with three full charges for an iPhone 4/S. In my testing, a full iPhone 5 charge (from totally, switch-itself-off dead to actually full, around one hour after the meter hits 100%) only took the Vault’s indicator from four bars to three bars.

In fact, draining this thing seems to be almost impossible. I have used it to half-charge an iPad mini, juice a dead Jambox, and even to keep an full-sized iPad 3 running while I use it and the indicator doesn’t seems to want to go down.

It’s pretty much like having the world’s longest extension lead with you at all times. 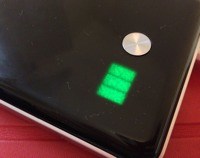 The Vault is a box the size of a fat pocket hard drive, and weighs 285 grams (on my kitchen scale, the naked iPad mini weighs 306 grams). It has two full-sized USB ports on one end, with a small miniUSB hole between them for charging. There’s also a button on the top for checking charge level (four LED rectangles form the readout) and activating the charger once you plug something in.

Of those two USB ports, one is a regular 1-Amp socket, the other is a 2.1-Amp fast charging port for the bigger iPad.

Fit and finish is good. The charger keeps charging until you unplug it (don’t laugh – I’ve tested battery packs which switch themselves off seemingly at random intervals when you think they’re still working), and all the sockets are good and tight.

If you’re in a rush, you can plug the iPhone into the powerful 2.1-Amp port. Last night, mine went from empty to full in less than two hours. This isn’t the whole story though. Probably due to the way the iPhone charges, I was able to get from 0-50% in well under an hour, which is enough to keep me going for the day. 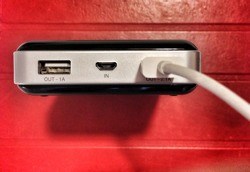 If you just want to keep your iPhone charged while you use it as a tethered hotspot, say, or if an overnight charge in your tent is all you need, then use the regular 1-Amp port.

And the Retina iPad? I haven’t had a chance to actually try to charge it from zero, but I have it plugged in to the Vault as I type this, and the charge is rising at about one percent every 8-9 minutes. That sounds bad, but is in fact the same as if I use the mains charger. Let the iPad sleep and it goes much faster.

In fact, the Vault is the only battery pack I have ever used that can make a dent in the 10-inch iPad’s battery. The others have all just spunked up their charges and died, without the iPad even registering a tick on its meter.

Fully charged, the Vault will see you through the day with almost any conceivable combination of devices

The Vault isn’t the lightest of chargers, but neither is it heavy, especially for what it manages to do. Fully charged, it will see you through the day with almost any conceivable combination of devices (remember, it’s not just for your phone). You could even use it to power a USB hub so your iPad can use high-power-drain mics for mobile recording, for instance.

I shall be packing this, uh, pack for my next week-long bike tour. Last time I took a solar panel and my iPad beat it almost immediately. This time I’ll take and iPhone and iPad mini along with the Vault and laugh in the face of three and four-day camping stretches between hotels. Hell, I can even use it to power an in-tent USB lamp.