Last week Twitter released Vine, an iPhone app that’s kinda like the Instagram of video. You take a 6-second video and share it in your feed. It’s a pretty simple idea, and Facebook just coincidentally added the ability to shoot video in its official iOS app.

A new update to Facebook’s app also adds the ability to send audio messages to your friends. The app’s nearby tab has also been redesigned.

The Facebook Messenger app got voice messages awhile back, but Facebook has brought the full gambit to its main app today.

Facebook says that photo and audio messages can be sent in the Messages view or when you create a new message in your inbox. Tap the “+” button next to the message field to view your options. Sending audio is slick; just tap and hold to record your message and the app will shoot it off. 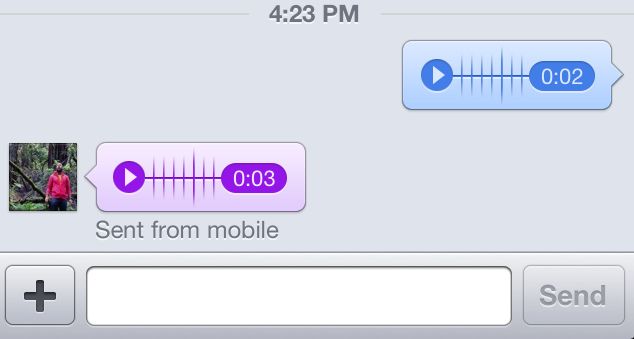 Video isn’t basked into messages like audio and photos, sadly. The update just allows you to shoot video right in the Facebook app instead of uploading it from your Camera Roll to your timeline. In the app’s main news feed, tap “Photo” in the top middle, and you can toggle between video and photo in your iPhone’s camera. The camera interface includes quick access to your device’s flash.

So this isn’t video sharing quite like Vine. It’s for posting to your timeline, not sending directly in messages.

The Nearby tab in Facebook’s updated app looks a lot cleaner and has an intuitive map view for seeing a visual layout of places in your area.