Apple’s new iMac went on sale yesterday, and like clockwork, the folks at iFixit have performed a thorough teardown. Given Apple’s track record, it shouldn’t come as a surprise that the 2012 iMac is incredibly difficult to repair. The razor-thin LCD is glued and fused onto the frame, and accessing the RAM and hard drive is like cracking open a vault.

The new iMac scores pretty low on iFixit’s repairability scale, but the machine’s innards are still quite an impressive feat of modern engineering. 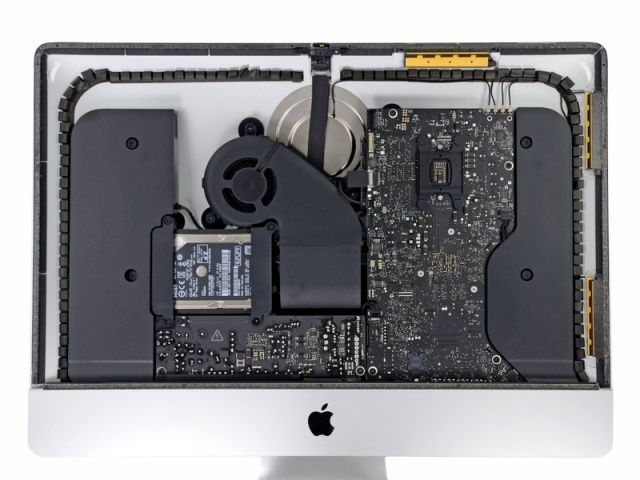 Being 5mm thin at its edge, Apple had to understandably conserve as much space as possible in the new iMac. The previous iMac’s display was held on by a series of magnets, but this new model’s LCD is held on by an adhesive, like the iPad. To save space, Apple fused the front glass and the LCD together, meaning that if one breaks, you have to replace both. iFixit notes:

The cost is quickly apparent: cutting open the display destroys the foam adhesive securing it shut. Putting things back together will require peeling off and replacing all of the original adhesive, which will be a major pain for repairers.

As another means of conserving real estate inside the machine, Apple has switched from a 3.5-inch internal hard drive to a smaller 2.5-inch laptop drive. Because everything is so closely packed together, the hard drive is encased in rubber to protect against vibrations. “Since the internal components are more tightly packed than before, small vibrations may carry through more components,” according to iFixit. “The rubber housing dampens the vibrations from the spinning hard drive so they are not perpetuated throughout the device.” 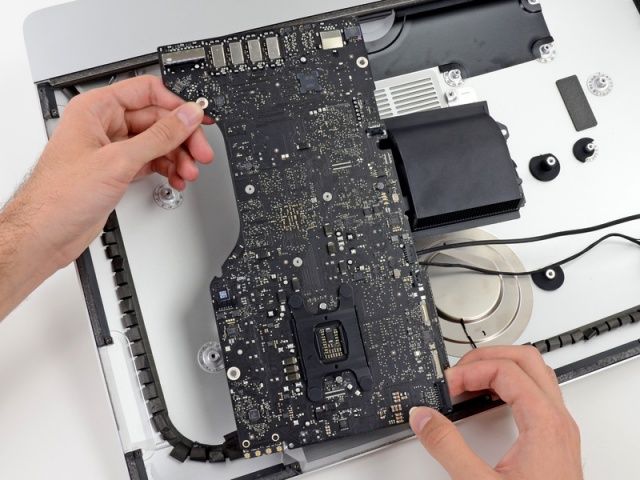 The new iMac’s RAM is technically replaceable, but you have to unglue the screen and get past the logic board to do so. Not exactly a cake walk. At least it’s not soldered on like the newer MacBooks.

To encase the new iMac together, Apple used a process called friction stir welding, a technique also used on automobiles and large airplanes.

Friction stir welding is more like joining clay than welding—it doesn’t melt the workpieces, but rather softens the area between them and forces material together, creating a strong weld with no weakened heat affected zone.

Here are a few other points of interest from the teardown:

The 2012 iMac scores a measly 3 out of 10 in iFixit’s Repairability Score, while the last iMac scored a 7 out of 10. You can replace the RAM with quite a bit of work, and putting together the iMac requires “masterfully” resealing the display with new tape. Another important thing to note is that it’s nearly impossible to add a second hard drive yourself (unless you’re particularly good at soldering missing connectors onto the logic board), so make sure you buy the configuration you need from Apple.