Apple quietly killed off a lot of things yesterday, including Ping, the old “watch-style” iPod nano, the iPhone 3Gs and more.

When we looked at Apple.com, though, we were surprised to notice that Apple seems to have decided with this generation to kill off the Bumper Case as well. They still sell the rubber-band-style case for the iPhone 4 and iPhone 4S, but they have opted not to stretch it to fit the iPhone 5.

Turns out, though, there’s an excellent reason why Apple didn’t update the bumper case for the iPhone 5. It no longer needs it.

Before we go further, let’s think about the problems the original bumper for the iPhone 4 and iPhone 4S was trying to solve. These were:

a) Antenna attenuation issues. Because the iPhone 4’s antenna circled the outside of the device, it could fall prey to a “death grip” which caused the signal to drop when a user’s hand accidentally bridged the separate parts of the antenna band. The reason why this occurs is a little complicated — essentially, if you bridge parts of the antenna band, you change the length of the antenna, which makes it track a different wavelength of radio signal other than the one Apple designed it for — but as Apple emphasized during the Antennagate controversy, using a Bumper or any other case fixed the problem.

b) The iPhone 4 and iPhone 4S had not one, but two large panels of exposed glass. Neither of these glass panels were flush with the skeleton of the handset, but were exposed all around. That means they could crack and splinter not only if you dropped your iPhone facedown, but if it landed on any corner, so unless you dropped the iPhone 4 or 4S precisely on its edge, the glass could crack. The Bumper changed that by protecting the edges of the glass, meaning the iPhone 4S could only crack if it was dropped right on its front or back.

When you look at the new iPhone 5, though, you see that both of these design problems have gone away. 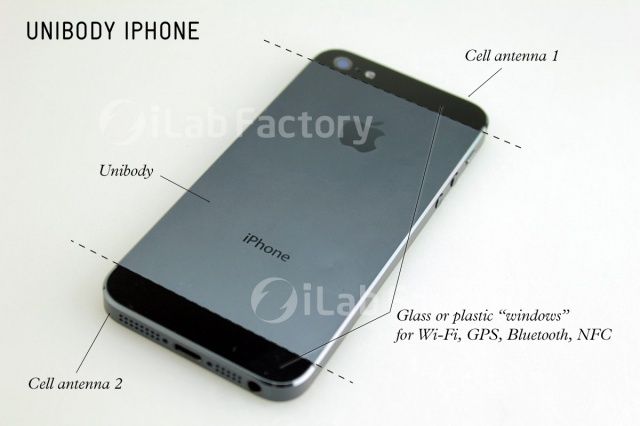 When it comes to possible “Antennagate” issues involving bridging the iPhone 5’s antennas, Apple largely eliminated those issues with the design of the iPhone 4S, which had an antenna divided into four sections by four separate gaps. That made it much more difficult to bridge all of the gaps with your hand and change the length of the antenna, therefore causing the iPhone 4S to start looking for the wrong wavelength of radio signals and dropping bars.

The iPhone 5 eliminates this possibility even further. Instead of an antenna that wraps around the entire handset, the iPhone 5 has two antennas that aren’t connected. As industrial designer Don Lehman has explained, the iPhone 5’s back panel features a cell antenna on the top and bottom of the device, surrounded by a thin strip of glass that allows Wi-Fi, GPS, Bluetooth and other signals to “peek” through. These antennas are so far apart that unless you have freaklish long hands, it’s impossible to “bridge” them with your grip. So long Antennagate.

So you no longer need a Bumper to prevent you from accidentally giving your iPhone a death grip. But the iPhone 4S’s fragility issues have gone away with the iPhone 5 too.

Even that’s unlikely to crack your iPhone 5’s glass if you drop it. The iPhone 5 uses Corning’s freakishly strong Gorilla Glass 2, which is 20 percent stronger than the glass the previous iPhone used. And because the new iPhone has a unibody design, there’s not only less glass exposed, but the back of the device is almost entirely protected with aluminum. And since the iPhone 5 is also about 20% lighter than its predecessor, it’s even less likely to smash or splinter if you drop it.

So why no Bumper for iPhone 5? The truth is that the new iPhone not only doesn’t need a Bumper, but it’s likely the first iPhone that doesn’t even need a case. Sure, third-parties will sell you one if you want to give your iPhone 5 some personality, but the iPhone 5 is Apple’s strongest phone yet. In all likelihood, it’s the first iPhone that even the clumsiest individual can carry around in his pocket as Steve Jobs intended: au natural.