comScore is reporting that Apple was ranked as the 13th most-trafficked web source during the month of November, attracting more hits than companies like Wal-Mart, eBay, VEVO, and ESPN. Apple saw 79 million unique US visits while Wal-Mart saw almost 59 million. 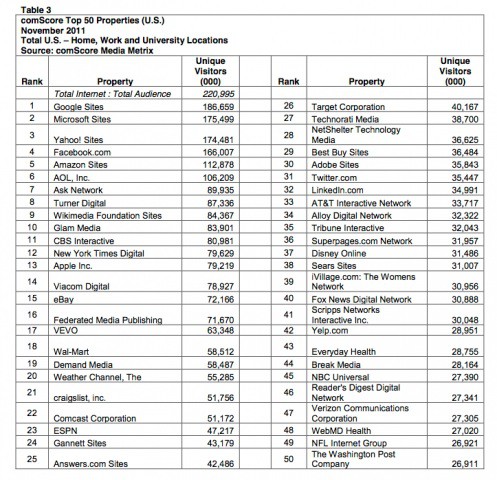 The iTunes Store was reported as accounting for 30% of Apple’s traffic, thereby putting the data into perspective. Wal-Mart is considered the largest physical retailer in the United States, and Apple’s web traffic is substantially greater.

Overall digital sales have doubled since last year, with comScore noting that the week between Christmas and New Year accounts for the most digital downloads all year. Christmas Day is the biggest day of the year for digital downloads (dubbed ‘Download Day’).

Stay tuned to Cult of Mac for plenty of how-to’s and recommendations for Apple gear over the holidays.

Number of comments on this postLeave a comment
Posted in: News Tagged: Apple, wal mart, web