My original plan when downloading this app was to use it as the basis for a little light humor.

“Sorry readers, can’t write another word, my phone is telling me to go and kiss someone.” That sort of thing.

But after downloading it, I made a terrible mistake: I actually tried using it. It turns out When Should You Kiss is the worst thing I’ve seen on iOS for a long, long time.

Right now it’s a free app, but according to App Shopper, it used to be $2.99. Whatever you do, don’t spend money on it under any circumstances.

The first thing you see is an advert. Just like a pop-up window on a website, complete with a little “x” close box in the top-right corner. Next, you see a “tip” about kissing. Tips like the one above. Or this one: 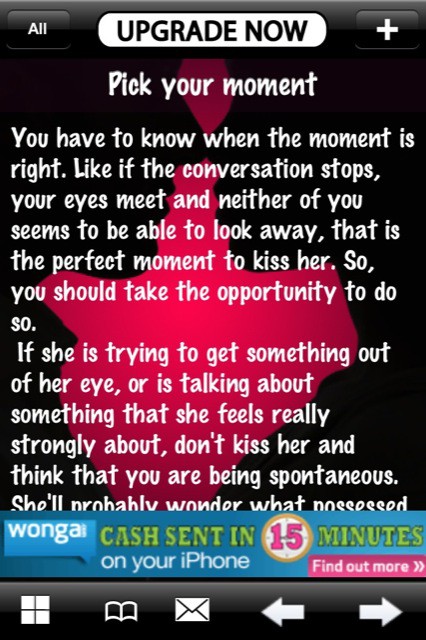 One of the more obvious controls is for sending a particular kissing tip by email. Tap that, and an email message is generated for you, containing the contents of the tip (and, of course, an advert pasted in underneath). But you want to know the worst thing? This auto-generated email has the developer’s email address pre-filled in the BCC field: 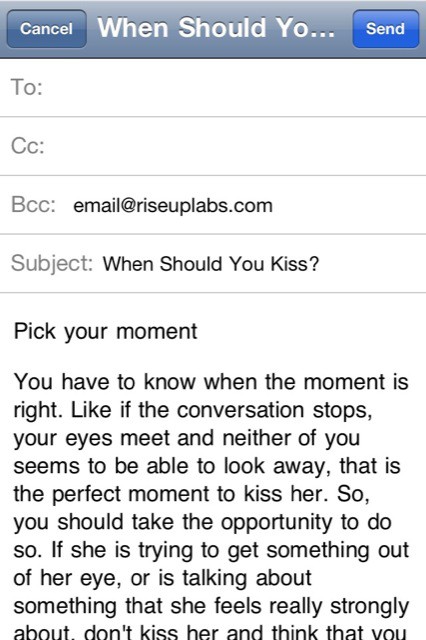 So should anyone be foolish enough to (a) waste their time using the app and (b) hate someone else enough to send them an email about it, the cunning developers behind When Should You Kiss will know who sent it and to whom it was sent.

Who knows what they might do with those email addresses they’ve collected; I can hazard a guess or two.

Seriously, this app is beyond a joke. It’s not just a bad app, it’s a nasty app. Its primary goal isn’t helping the love-lorn, but rather bombarding them with ads and luring them into revealing their own and other people’s email contacts.

Remember when Apple published its App Store Review Guidelines document (we covered it here last year)? The one that said:

Above all else, join us in trying to surprise and delight users. Show them their world in innovative ways, and let them interact with it like never before. In our experience, users really respond to polish, both in functionality and user interface. Go the extra mile. Give them more than they expect. And take them places where they have never been before.