Earlier today I got a chance to talk to Walter Isaacson, Steve Jobs’ authorized biographer. Isaacson’s 620-page book hits bookstands today. He spoke while preparing to check out of his hotel in New York, where he’s conducting a whirlwind media tour for the book, which promises to be one of the biggest hits of the year.

In our interview, Isaacson revealed that Jobs was actually a lot more active in his cancer treatment than previous reports have suggested. He also thinks Apple will be OK without Jobs because he spent a decade building a great team and an institution infused with his DNA. And that the man, like the company he built, was an intriguiging mix of the arts and sciences. 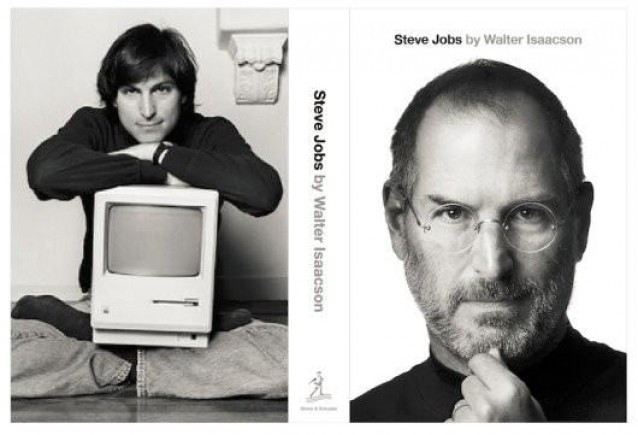 Walter Isaacson: You know more about this than anybody.

LK: I didn’t know so much. He was so private.

WI: He was private but he also wanted his story told.

LK: I read that you were pretty skeptical initially — or reluctant.

WI: When he first talked to me in 2004 I thought he was a young enough guy, I’ll do it in 20 or 30 years when he retires. I didn’t realize that he was sick. In fact, it wasn’t until 2009 that we started talking seriously.

LK: He knew then that he had cancer, right?

WI: He was about to be operated on, yes.

LK: But he didn’t tell you that, he kept it quiet?

WI: I don’t think he told a lot of people until he had his operation.

LK: How was the experience of the last two years?

WI: It was intense. He was more intense and more emotional and more open than I expected. We spent a lot of time just in conversation walking and talking. The essence of him I think is the ability to tie a great emotional intensity to a kind of rational technological business sense.

WI: Yes. I liked him when I first met him in 1984 and I sort of liked him but was rather charmed by his intensity.

LK: Right. A lot of people talk about his charisma. But that’s different to getting to like somebody. So you got to like him. Did he scream at you?

WI: He got mad at me when he saw a proposed design for the cover about eight months ago. He expressed himself in a full and frank manner when we were on the phone. He told me a variety of words that he thought of the proposed cover. Then he said that he would really only go forward if he had some input into the cover design and I spent about two seconds thinking about that and said sure. He’s got the best design eye in the world so I was quite happy for him to have input and mentioned it in the introduction to the book so that everybody knows.

LK: This was the only input he’s had in the book?

WI: Right. He told me he didn’t want to read it in advance and he said that there would be a lot in there that he wouldn’t like but he didn’t want it to feel like an in-house book.

WI: I think that it has a narrative arc to it of a person who is both rebellious and part of a counterculture, but who can connect to being sensible and scientific and businesslike. To me, that’s the essence of his life. It’s connecting these two opposing strands. That of the counter-culture and poetry and that of processors.

LK: It sort of parallels the very essence of Apple too.

WI: He told me at the very beginning in 2009 that Edwin Land (of Polaroid) had once told him that standing at the intersection of humanities and technology was a great place to be. I think that made a deep impression on Steve and it turned out to be a theme that became part of the book.

LK: One of the biggest revelations from the book was his delayed cancer treatment.

WI: Yeah. That fits into the theme in a way because it wasn’t just as if he was trying counterculture cures, or whatever you want to call it — a New Age way of treating it.

He was doing that but at the same time he starts soliciting the best scientific advice, including targeted therapies and stuff at the frontiers of DNA sequencing. So it’s sort of both sides of his personality become engaged and eventually they connect.

LK: So he was actually more proactive? He was looking at all the different options — alternative as well as traditional?

WI: Right. And I don’t make it incredibly clear in the book but I do talk about all the DNA sequencing and frontline scientific approach. So you have that connection even with his cancer situation — the connection of that New Age rebel who resists conventional authority and the rigorous believer in technology and science. And in the end, the science wins out and he does all sorts of therapies that keep him alive wonderfully for seven years, during which he brings out iPods and iPhones and iPads. And he kept on, as he put it, being one little lily pad in front of the cancer for many, many years.

LK: I was struck that he always obsessed with death. He almost had a Freudian Thanatos syndrome.

WI: Yes, a lot of people wrote about it and talked about it. He talked about life being an arc and that were all going to die. I also think that it comes from his Buddhist training that life is a journey and that the journey is the reward.

LK: The Buddhism thing. I don’t really recall him talking about it at all. Was he really a Buddhist? Did he really believe?

WI: He felt he got a lot from his Buddhist training. He told me — and it’s in the book — he had gone on a quest for enlightenment to India and he comes back with the Zen Buddhist appreciation for intuition and experiential, he calls it, and wisdom. And he says not everything can be done analytically. This intuitive experiential wisdom that he learned to appreciate — and, if I might say, that too fits into the arc of the narrative that I was describing of there being two parts of Steve’s personality and he’s able to connect the ethereal part to the analytical part.

LK: What about the spiritual part? Believing in life after death, in reincarnation?

WI: At the very end of my book I have him talk about that, sitting in his garden. It’s the last page of my book. He said he’s 50/50. Sometimes he believes there’s an afterlife and we all live on and the experiences we have live on. And sometimes he thinks it’s a switch, when you die, ‘click,’ you’re gone.

I think he felt that. He kept telling me, ‘It’s the great mystery.’ And for somebody like him, he could appreciate the mystery instead of just trying to know the answer. The journey is the reward.

LK: How do you think Apple is going to do without him?

WI: I think that his goal was not just to create great products but to create a great company that had this connection between creativity and technology infused into its DNA. He felt that’s why he had to be rough on people at times, to create a team that would have a company that would last for generations. That’s why he was so interested in designing the new headquarters because he believed it would be an enduring expression of that. I think that he has a pretty amazing team. People say that he was hard to work with but the proof is in the pudding and people actually remain loyal to him and he created a team of A players and they stay fanatically loyal to him. For all the talk — including in my book of him being hard to work with — you also have to look at what was the outcome. You have a team in there now that ranges from Tim Cook to Jony Ive: from totally focused engineers to very artistic people. And I think that Apple is the company most likely to be around in generations from now, like Disney.

LK: Andy Herzfeld at the end of the book had a very interesting quote that he felt that Steve was sometimes unnecessarily mean.

WI: Steve answered that to me by saying, ‘There’s probably a more velvet-gloved way to have done things. We all talk in code but that’s not who I am. I’m just some middle class kid from California. And we have rip-roaring arguments at Apple where we can each tell each other that you’re full of shit and to me that creates the best team. And it makes sure you don’t get the bozo explosion where there’s too many mediocre people there.’

I think that there was probably a more velvet-gloved way to do things. But people who wear velvet gloves don’t often make a dent in the universe.

LK: Yes there’s definitely truth to that but there’s also the experience with Daniel Kottke, his good friend, and how he didn’t have any early shares in Apple.

WI: I talked about that on 60 minutes last night. I don’t know how to say this politely but you have to make certain cut-offs. This is the two sides of Steve, which is the old rebel side but also the rigorous business side. And you have to say: “At this level people get stock options.” But then you can’t go and randomly say, ‘But this kid was in college with me and in the garage and I love him so let’s give him some.’

Eventually Kottke did get options too. But Steve has a very emotional impact on people, so when he acts in a very rational way it can upset people.

WI: I think his passion for perfection drove him to care intensely about having only the best players at Apple. ‘A Players’ like to work with A players and that was his goal at Apple.

LK: And did he very much achieve this in your opinion?

WI: Absolutely. I mean look, and maybe I’m part of the reality distortion field, but home run after home run. People said the iPod is not going to work. Then the iPhone, the iPad. Each one of these digital hub devices becomes a home-run out of the blue.

Likewise, ten movies in a row (at Pixar) are home runs. So you have to look at the result.

How many home runs does any other company have in a row? One or two or three? But not this many. And so you know, this is the company that will be remembered a generation from now.

LK: Do you think Pixar is a good example of why Apple will be okay without Steve?

LK: Well, better than just fine. Could I just ask you just one question that the readers asked? They asked about his Armenian heritage. Did he speak Armenian?

WI:-No. His mother was a refugee from Armenia. Clara Jobs was an Armenian refugee but her parents came over and as far as I know Steve never spoke any Armenian.

LK: What was his favorite App? Did he have one?

WI: He told me that he loved the newspaper apps because he really hoped the iPad would be able to save the business of journalism just as the iPod helped music.

LK: Great. Many thanks for your time.