The device probably looks like the mockup above. It might be the iPhone 5 or a new, bigger iPod touch. It has a 4.44-inch diagonal screen, which is much larger than most observers are expecting for a new iPhone.

Whatever it is, Hard Candy expects Apple CEO Tim Cook to unveil the device at today’s press event. And the company is busy churning out a range of different cases that will be on store shelves when the device ships.

Hard Candy cases says it received identical data about the device from three sources. This is what they heard:

Is it the iPhone 5? Could be, but the screen size is much bigger than most observers are expecting. A 4.44-inch screen would make it significantly bigger that the iPhone 4, which has a 3.5-inch diagonal screen. It would be just a bit bigger than the HTC Evo 4G, one of the biggest Android smartphones on the market.

Hard Candy CEO Tim Hickman says it might be a new iPod touch. Maybe it’s an iPad mini: a smaller, cheaper device to rival the 7-inch Kindle that is likely to be a big hit this Christmas?

Whatever it is, only Apple knows for sure. Apple’s CEO Tim Cook is expected to unveil a new iPhone later today.

Trouble is, no one knows what iPhone he will reveal. This year, the rumors are all over the shop. And while there is all kinds of evidence for the iPhone 4S (leaked parts, inventory system details, software references), there’s been nary a peep about the iPhone 5 from the supply chain.

What Hickman is confident about is the outside dimensions of the device: He is confident enough to start manufacturing 50,000 cases and have them shipped to stores.

Hickman said the company has made similar bets in the past and has been right. If Hard Candy hadn’t already started making the cases, it risked being left out when the device goes on sale. Retailers are going to fill their shelves with whatever cases are available, Hickman explained, and Hard Candy can’t risk being late.

“This is 100% trying to survive in the market,” he said in a phone interview. “You’ve got to get product in quantity on the shelf.”

He said dozens of other case manufacturers are probably also tooling up to make cases for the device.

Asked if he was nervous about betting on an unseen device, he replied:

Here are the details of the device expected by Hard Candy:

The mystery device is wider, taller and thinner than the iPhone 4. It has a tapered design which makes it feel very slim. It has a much larger screen than anyone is expecting — 4.44-inches diagonal. The Home button is lozenge-shaped. 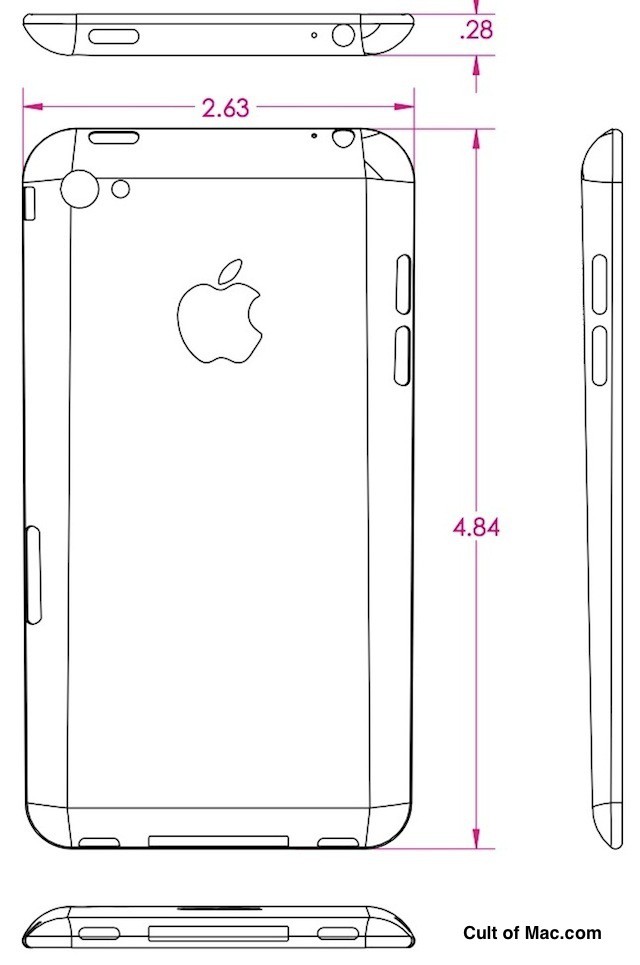 The mystery device is 4.83-inches tall, 2.63-inches wide, and .28-inches thick. It is thicker at the top than the bottom. Other external details are similar to the iPhone 4, except the Mute button has been moved to the other side. 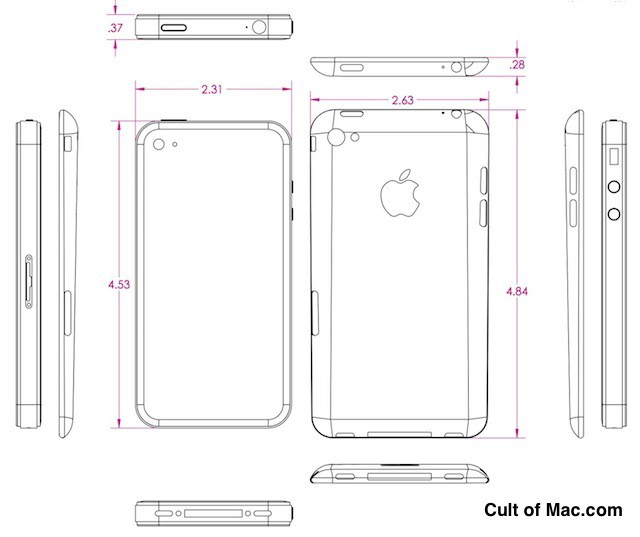 Here is how it compares to the iPhone 4. As you can see, it is significantly taller, wider and thinner (.28-inches compared to .37-inches). Plus, it tapers at the bottom, making it even thinner overall. 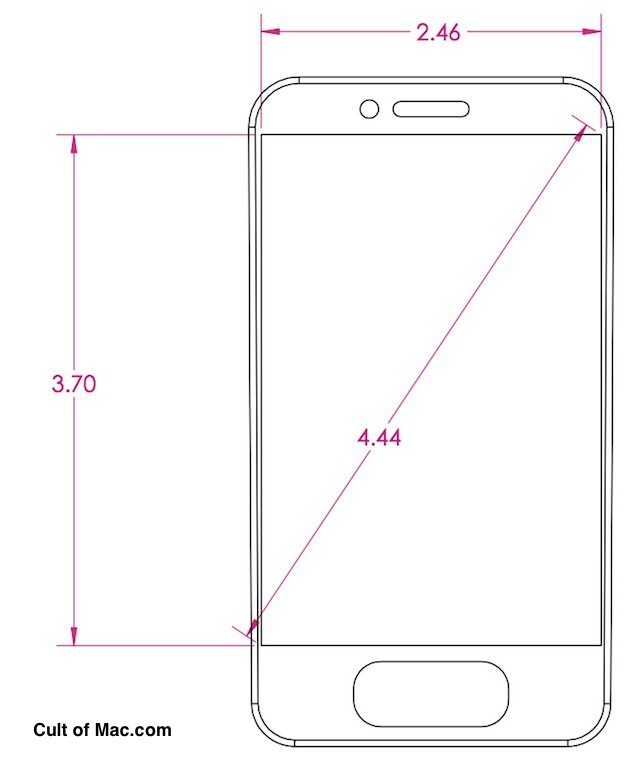 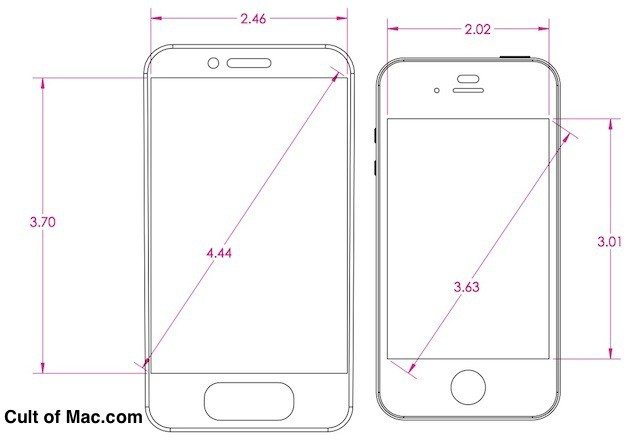 Here is how the screen measures up to the iPhone 4, which is 3.63-inches diagonally. 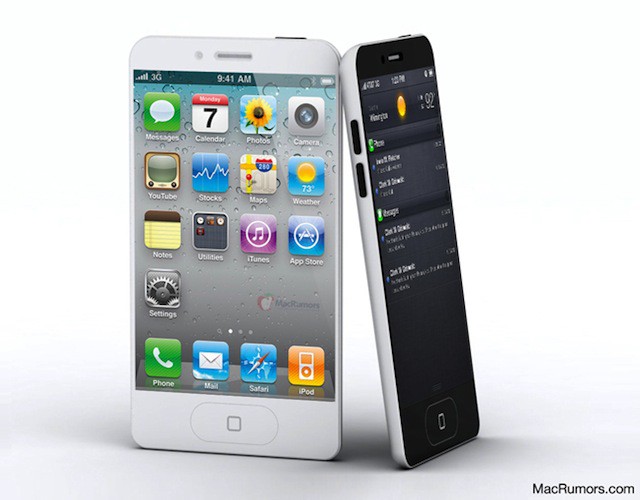 If Hard Candy’s specs are right, the device will look like this iPhone 5 mockup commissioned by MacRumors, but likely be larger.

And here are some of the cases that Hard Candy is busy churning out. It has 14 different designs, including the popular Bubble Shell and Sport Shell cases. 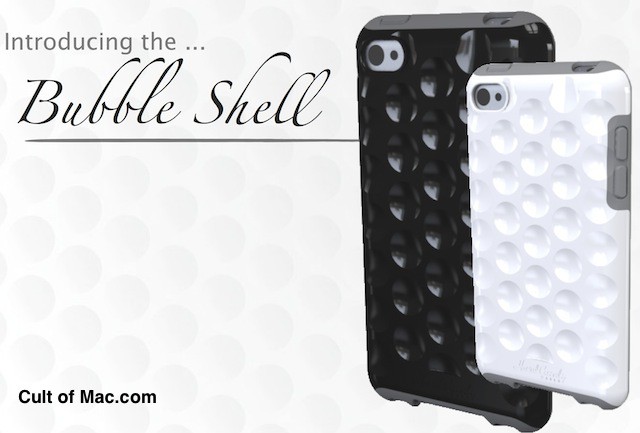 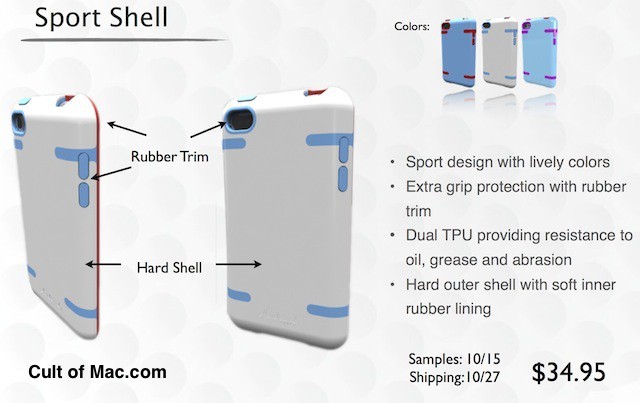