Apple is working on a new type of drive that combines the best aspects of both traditional platter-based and flash storage. According to a recent patent published by the U.S. Patent & Trademark Office, Apple has some innovate ideas up its sleeve for a SSD/HDD combo drive.

“On September 29, 2011, the US Patent & Trademark Office published a patent application from Apple that reveals a next generation Hybrid Drive that includes both a hard drive and Flash. Intel will be pushing their Smart Response hybrid drive systems for consumer systems in 2012 and Apple’s patent would indicate that they intend to have their own solution for future hardware. Uniquely Apple’s twist to this drive is that it will handle different types of storage media based on an environmental state of the hybrid drive. If the drive undergoes temperature, vibration or acceleration variances that could cause the hard drive to temporarily fail, the system would save the volatile data to the Flash drive.” 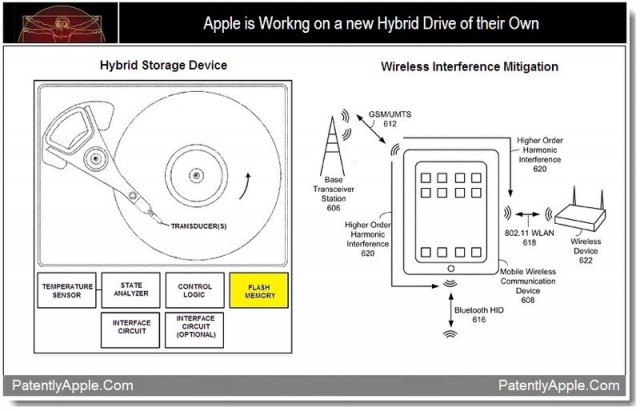 If the system detects a possible compromise on the HDD part of the drive, data will be automatically reallocated to the SSD (kind of like how RAID technology works now, only smarter). Platter drives are much more susceptible to physical shocks, magnetization and extreme temperatures, so a modern SSD would offer an added layer of assurance and speed to the whole process.

Apple’s upcoming drives will be very smart and efficient. Being able to predict harmful circumstances will result in less drive failure and better performance overall.

Intel’s Smart Response hybrid drives will hopefully push Apple to get these new drives out on the market sooner rather than later. As SSDs go down in price, it will become financially easier to implement larger amounts of flash storage.

Be on the look out for these hybrid drives from Apple in 2012.