Your next Apple TV could be more like the Microsoft Kinect than a normal set-top box. Apple has just filed one insanely cool series of patents on 3D display technology.

Essentially, Apple has detailed 3D gesture and imaging designs of science fiction proportions. Say goodbye to the remote, and hello to the hologram! 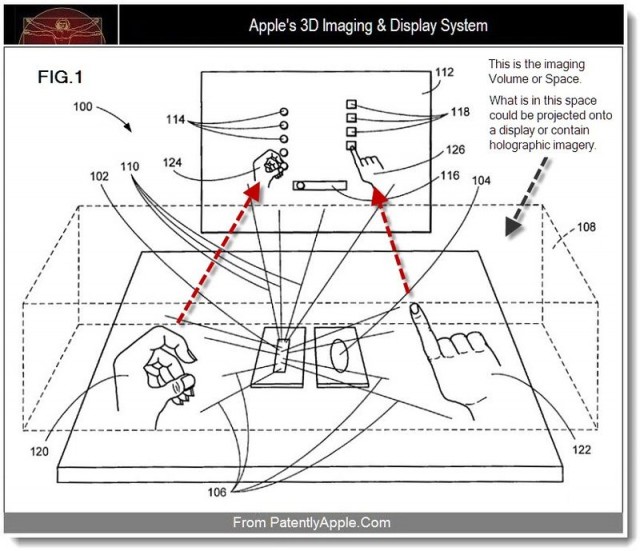 “Apple’s patent covers a wild 3D system that could generate an invisible space in front of the user that could allow them to work with holographic images or project their hands onto a screen in front of them to manipulate switches or move pieces of virtual paper or parts of a presentation. One could only image how this could be applied to 3D gaming, business or medical applications in the future.

Accordingly, it will be understood that any virtual object could be grasped and manipulated within the virtual space of the imaging volume or space. Such objects, in addition to controls such as knobs, sliders, and buttons, can include virtually any kind of physical objects (e.g., a block of wood, a sheet of paper, hand tools, styli, virtual paint brushes, pencils, pens, grinders, knives, scissors, and so forth). When Apple mentions a “sheet of paper” or moving objects, I find that it fits in rather well with their latest projector system revelations of last month. Patent by patent Apple’s vision of an advanced 3D projection system is coming together.”

The is the future, folks. Want to play a racing game? A holographic steering wheel appears in front of you. Need to type an email? Turn on the virtual keyboard.

Obviously, this kind of tech is years out from reaching our living rooms, but, as Patently Apple notes, Apple has been filing patents and causing ripples that point towards this as the future of consumer devices.

For an idea of how this could work, check out this concept video: