Even bracing for a natural disaster, Apple knows how to brand.

Here are some pics of the shuttered Apple stores in the New York area, closed in anticipation of Hurricane Irene, complete with sandbags in the company’s signature metallic gray with white sheets over the windows instead of tape strips.

Although the tempest has since been downgraded to a tropical storm – no doubt “her” witty Twitter account has something to say about that —  as far as we know Apple stores in the area are staying shut as planned until tomorrow.

It’s hard to see Apple’s 24/7, 365-days-a-year open door policy violated, no doubt someone with an ailing MacBook or looking to replace a forgotten battery charger is having a very long weekend. 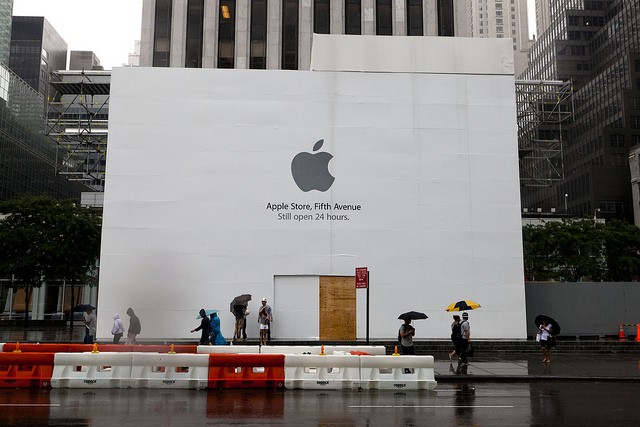 And the SoHo got sandbagged in style, as per this great photo from 13pt– what do you make of the iRene graffiti?

An interesting side note: Apple’s  use of gunmetal gray “designer” sandbags used at all the stores.

Fortunately, the hurricane turned out to be a more hot air than anticipated so there were folks wandering around New York comparing how various shops were shoring up their storefronts.

The Apple bags were noted for their unusual color and the fact that they were apparently hand-filled and tied, as opposed to other companies whose off-the-shelf solutions were already spilling open.