You know what they say, ignorance is bliss. According to a study by Retrevo, 34% of iPhone users believe that they already have a ‘4G’ device. AT&T and Verizon are starting to aggressively market their 4G networks, and new, 4G-equipped smartphones are hitting the shelves from iPhone competitors, like Android.

The typical consumer can be easily confused by similar numbering and phrasing in marketing, and the iPhone “4” seems to be the reason for all of this 4G confusion.

Carriers are notorious for intentionally blurring the lines between what separates different technologies and products. Put yourself in the shoes of a normal person that walks into an AT&T or Verizon store. With 4G marketing everywhere alongside a giant “iPhone 4” marquee, wouldn’t you get confused? 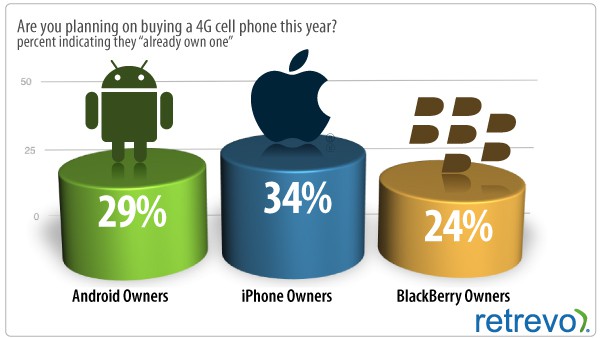 “Maybe the “4” in the iPhone 4 name gives iPhone owners (34%) the false impression that they already own a 4G phone but the fact is Apple doesn’t offer a 4G phone at the moment.”

To add to the confusion, carriers are slapping the 4G label on Verizon’s LTE (Long Term Evolution) technology and AT&T’s HSPA+ data network. Both technologies offer different sets of speeds at different rates, but it’s all thrown under the “4G” umbrella. 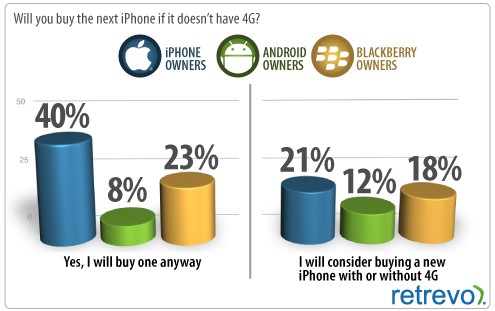 In terms of the iPhone, Retrevo also asked if the lack of 4G speeds would hurt iPhone sales in the near future.

“The answer to the question of whether or not the lack of 4G in the next iPhone will prevent consumers from buying one is “probably not” at least among current iPhone owners as 61% of iPhone owners say they don’t care if the new iPhone has 4G or not and will buy, or “consider” buying, the next iPhone regardless of 4G. That’s good news for Apple as rumors say not to expect an Apple 4G iPhone until 2012. The responses to this question also show Android owners as a loyal group with only 18% saying they would buy or consider buying a new iPhone, 4G or no 4G. On the other hand, BlackBerry owners look like potential defectors with 41% saying they’ll buy a new iPhone, or consider buying one with or without 4G.”

If one-third of iPhone users already think they have a 4G device, then most consumers probably don’t care if an iPhone 4G comes out this year or not. The likelihood of a 4G-enable smartphone from Apple in 2011 is very slim, so don’t hold your breath.

We all probably know people that would fall into this 34% demographic of iPhone users that are oblivious to the difference between 3G and 4G. Does that let Apple off the hook for another year with no iPhone 4G? As always, sales will have to determine that.