James Savage from the RetroMacCast got in touch to share his story of original Mac ownership.

James owns up to having a collection of 170 Macs. I’ll let him explain more…

“While it was the first Macintosh Apple released, my original Macintosh was not my first. It was probably around my 100th. This Mac was an eBay acquisition like most of my Macs which now number around 170.

“Then about five years ago, in an effort to retrieve my high school files from the floppies of my long-gone //e, I set out to get a //e and then an LCIII with a //e emulation card. At this point I discovered eBay was like a gigantic Macintosh garage sale accessible to me 24/7, and I could get all those models I never could afford for pennies on the dollar. Much
to my wife’s chagrin, Macs started arriving at our house almost daily.

“Sometime during that frenzy, I purchased this Macintosh 128k. It is now the centerpiece of my collection which includes every major model of Macintosh Apple ever made. I call the room where the bulk of the collection is held Macca.” 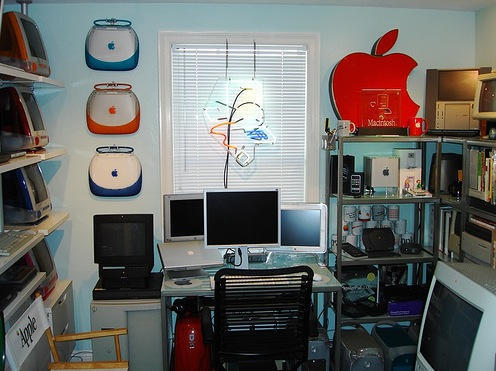 ABOVE: James’ Macca shrine to all things retro. More pics here and here.

“With the collection largely complete, I’ve found an outlet for this obsession in podcasting. With my co-host, John Leake, I produce the RetroMacCast. It turns out that there are many more Mac collectors and Apple history fans out there like us, so each week John and I walk down the Macintosh memory lane. Our slogan is “It’s not old. It’s retro!”.

“For our 102nd episode on the 25th anniversary of the
Macintosh introduction, I started up my original Macintosh for the first time in over a year and was greeted with a sad Mac. Thank goodness I later discovered that I had another Mac 128k hiding in a closet, and it worked just fine after a little MacGyvering with a paperclip.”

ABOVE: One of the orginal Macs gets switched on to celebrate the 25th anniversary.

“Thankfully, I got to see its smiley Mac face just in time
for its 25th birthday. The other will be a project for another day and another episode.

“Every day I step into Macca and marvel at the wonderful (and not so wonderful) products Apple has given us over the years. I feel very lucky to have grown up with the company and to have my life enriched with some truly innovative computers. I look forward to another 25 years of “insanely great”.”

Thank you, James, for your story and pictures. Anyone else out there got a Macca? We want to hear from you.