Cult of Mac Mobile menu toggle
Mobile menu toggle
With Apple already ahead of Microsoft in terms of market capitalization, could Tuesday’s earnings report take the Cupertino, Calif. company just another step toward earning more revenues than its long-time foe? One expert believes that day is nearing. “Most analysts think it is just a matter of time before Apple is truly the bigger company,” Andy Zaky tells Fortune.

Some of what Apple will say tomorrow after the stock market’s close is already known. For instance, the handset maker has said it sold 1.7 million iPhone 4s in three days, 3 million iPads in just 80 days, and between 2.9 million to 3.5 million Macs. Both Apple and Microsoft are expected to report more than $15 billion in quarterly revenue, but will it be enough to put the consumer electronics company over the top? Probably not. 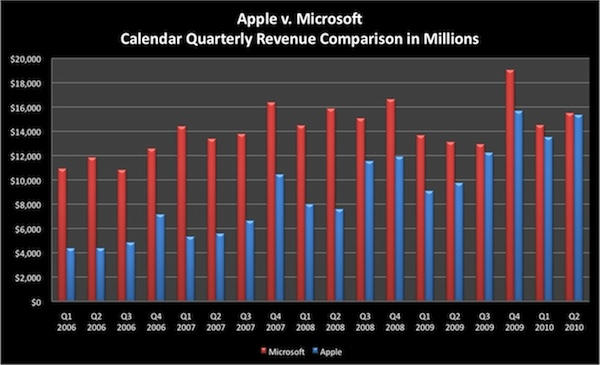 Microsoft still has one advantage. According to Zaky, Microsoft has an operating margin of more than 50 percent, an enviable asset and one likely to keep the venerable software giant out of the grasp of Steve Jobs and the Apple money-making machine.