After one of the longest waits in the Intel era, the MacBook Pros were updated Tuesday complete with a migration to the new Intel i5 and i7 architecture. In addition to the CPU update these new top-end notebooks feature better battery life, and the ability to switch from integrated to high performance graphics on the fly. We here at the Cult managed to get our hands on one of the top-dog 17 inch i7 models on Wednesday have have been putting it though it’s paces.

Follow us after the jump for out first impressions and a detailed rundown of the King of the Hill’s real world performance.

This is one beautiful machine. While not cosmetically different than the last model, it’s a substantial upgrade from my Third Generation Core 2 Duo MacBook Pro. The unibody case is solid and doesn’t have the flex of the older models. The LED screen is brighter, the text clearer, and the machine runs noticeably cooler to the touch than my older “lap-warmer” model.

The edges on this thing are sharp, especially around the magnetic latch. Really sharp, I didn’t have it fifteen minutes before it drew first blood on me, I guess we know who is the boss of who here. I’d file the edges but I can’t bring myself to do it.

Also querky, is the charging mechanism. While the old style 85 Watt power supplies provided with the legacy MacBook Pros, work, I’ve yet to get one to charge the new notebook to a full 100%. The provided power brick is smaller and easier to travel with and did manage to give the machine a full charge. Who knows why that is.

Now on to what everyone wants to know…

It is fast, fast, and wicked fast. How fast exactly?  Used to be my Generation 1, Mac Pro with four actual processors mounted on 2 dies, and a (then unheard of and crazy expensive) 10 gig of RAM, was king of the hill –the fastest workstation money could buy.

Three years go by and in strolls this svelte beauty (let’s call her Scarlett) with two cores, four threads and a genuinely affordable** 8 gigs of RAM, and like a pretty girl upstaging the burly guy in a buddy cop movie, she keeps pace with him every step of the way.  Sure I understand Moore’s Law, but still that’s freekin’ impressive.

** For the first time in my recollection Apple isn’t gouging customers for memory; the 8 gig RAM upgrade is a reasonable $400 bucks, pretty much what it would cost you aftermarket from a reputable dealer like OWC.

So enough of artificial benchmarks, lets see if we can melt this thing, shall we?

Test Procedure 1: Playing a video in Windows 7, running MS Word, ChronoSync, and sundry other background applications in OS X. I’m typing this as the benchmarks are running, there is no slowdown in the OS at all, The video in Win 7 isn’t skipping. 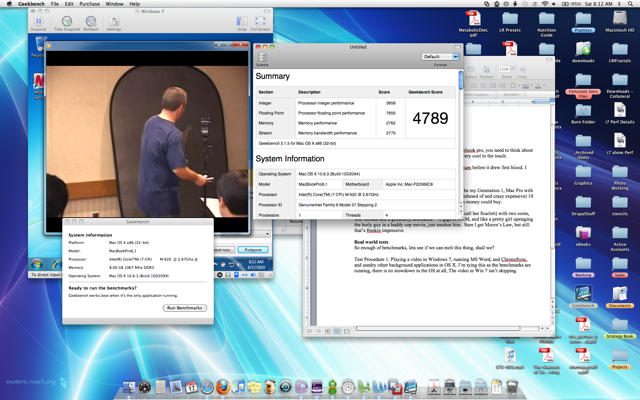 Okay, that’s impressive, but you all pay me to push the limits, lets try that again. 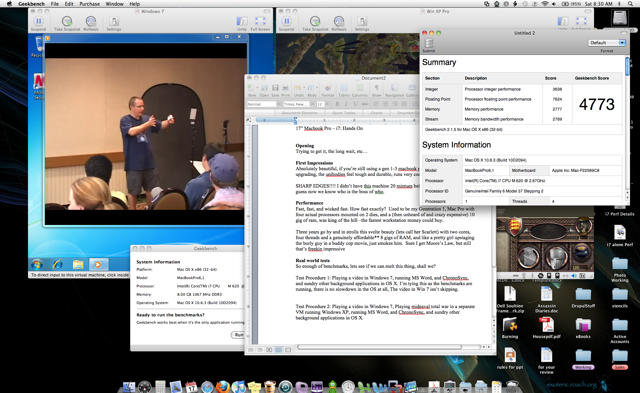 Ooookaaaay. That’s still crazy fast. The video didn’t skip a beat (the game’s graphics were a bit wonkie, but they were that way without any load as well suggesting a graphics driver issue). Regardless, the CPU stress was real as all the thinking and rendering of the game, moving pieces around processed normally and happened smoothly.

I’m getting a little frustrated, I figured that test would push her to the red-line, and adding the new VM caused a statistically null impact to our benchmark. It could be that all we’re proving is that VMWare and OS X are crazy efficient at resource management, which we  already know. Lets go further, shall we, this time in addition to VM’s lets load up the core OS with CPU/GPU and Memory sucking tasks.

Test Procedure 3: Still playing a video in Windows 7, also converting a video from mpeg to DivX in FFmpegX in OS X, as well as playing music in iTunes, playing a video in QuickTime, rendering JPGs from RAW and exporting photos from Lightroom, and as before typing this & running sundry other background applications. 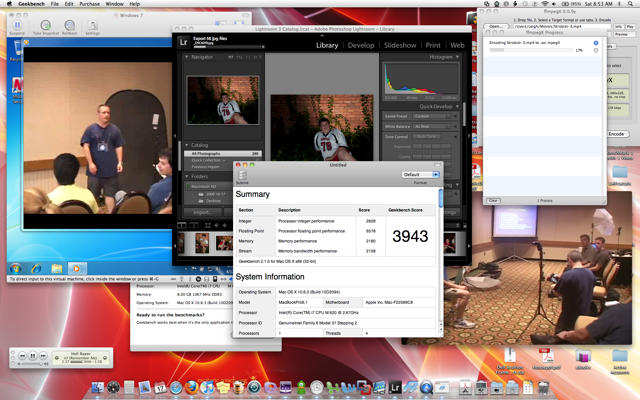 Wow, I finally managed to warm this machine up. Unlike the lap scorching prior generation, these i7s run cool. Very, very cool. Nevertheless, doing all of that, this machine still benchmarks faster than my old C2D 2.4 sitting idle**. The video in Windows 7 did stutter a couple of times (probably from hard-drive bandwidth and not CPU), but nothing running in the core OS missed a beat –literally.

So I’m done trying to break her, you win, Scarlett, you are one fast girl, you took all I got and you didn’t break a sweat.

Note: The videos used for this test are from the Strobist Collection, they are expensive and worth every penny, I converted mine to be able to take with me everywhere I might need inspiration. David Hobby, you’re my Obi Wan.

So what have we learned here?

I would love to see a Windows machine pull this off. Really, I’m not being snarky. There are Windows 7 powered i7’s out there. I would genuinely like to see what they’re capable of.  If you’ve got one, try to mimic Test 3 and shoot me a screen-shots of your test and Geekbench scores.

Is it too fast?

Sort of a silly question, its like asking ‘is my Aston Martin too fast?’ Short answer: no. The more complicated answer is ‘maybe’. See, the combination of an OS that is continuously optimized to improve performance (rather than add features), with Moore’s Law of CPU horsepower suggest that Macs might be getting to the point of diminishing returns for consumers.

This machine with Apple Care and tax is $3600 bucks, is it worth it? Especially if you’ve already got a very, very fast C2D 2.4 17” MacBook Pro as I do. Maybe Not. Because the user experience isn’t That much different. There’s no, new-super-fast computer feeling you get when you upgrade a Windows machine, because the OS is snappy and fast-feeling on a varriety of different hardware. You really need to stress the machine to get an appreciation for just how fast it is, and most users aren’t going to do that.

Now, I do a LOT of background and foreground tasks, I’m constantly editing documents, producing art, listening to music and working on photographs, so as I use a multi-core tuned Adobe CS 5 my tune might change. But for an average word-processing, email jockey, I don’t know that this upgrade would have been worthwhile.

The good news: it is really, really starting to look like we’re gonna get 5-6 years or more of life out of our Macs and amortizing the investment against that life-cycle ain’t too shabby compared to a PC that needs to be upgraded every 2-3 years to stay in peak performance.

Good News #2: while Apple is getting some static about the 13” model sticking with the Core 2 Duo architecture, don’t look at it as running last year’s tech. Look at it as taking state of the art, and pushing it down to entry-level. Those 13” books are screamers, every bit as fast as my old 17” super-computer and a heck of a lot more portable. Heck, I might have to get one just to travel with.

Updates: The geekbench results here were run with the 32 bit version. I’ve managed to run the benchmarks with the 64 bit version of geekbench, and the results are even more impressive.  According to the results browser (which averages all scored by Mac model) it puts this new MacBook pro above all but the 8-core machines. Very impressive, an even greater argument for not wasting money on silly-expensive add-on’s like SSD drives (see comments for more detail) 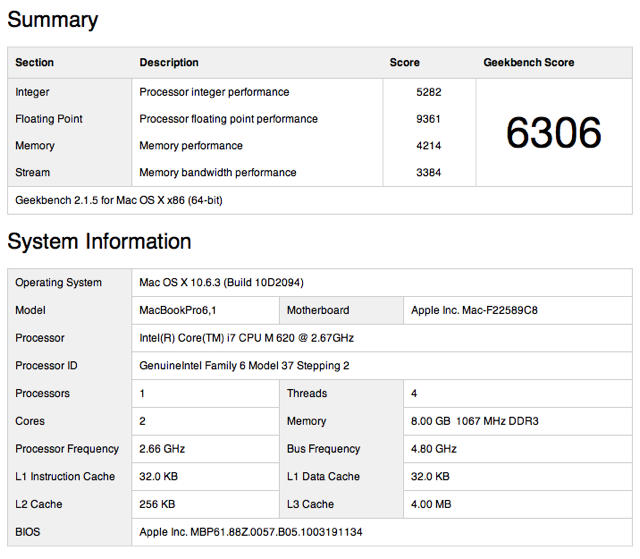 On battery life: I got about 5-6 hours on an uncalibrated battery, on a machine that was constantly running a medium intensity process (3d screens aver). I will update further as we get more battery tests done.