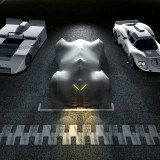 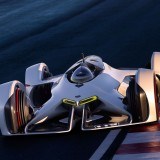 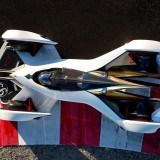 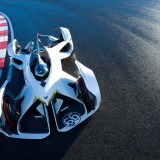 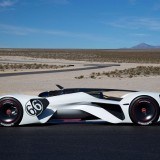 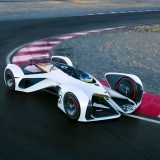 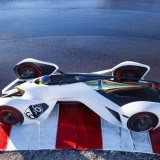 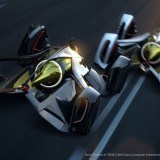 Chevrolet has “built” a laser-powered race car for Gran Turismo 6 fans to rip around the PlayStation track.

And they didn’t go the expected route by souping up a Corvette, Camaro or even a Chevette. Instead they partnered with their friends from yesteryear, Chaparral, and came up with the Chaparral 2X Vision Gran Turismo (VGT) concept car.

Texas-based Chaparral racing and the folks at Chevrolet worked together almost 45 years ago, cooking up advanced technology that is still used in race cars today.

The futuristic VGT concept car, which is currently on display at the Los Angeles Auto Show, is designed to be operated by a driver lying prone and is said to work more like a squirrel suit, with the driver’s body movements controlling the car.

Chevy says this of its new concept:

“The Chaparral 2X VGT’s concept propulsion system is inspired by technology derived from advanced work targeted at space travel and future aircraft design. It features a mid-mounted laser, beamed-energy propulsion system, which pulses beams of light that focus in a shroud, creating shock waves that generate tremendous thrust in the lightweight race car.

With a 671-kW laser, powered by a pack of lithium-ion batteries, and an air-powered generator to provide 900 bhp of thrust, the Chaparral 2X VGT will be capable of a 240-mph top speed in the video game, with 0-60 acceleration capability of 1.5 seconds.”

Those are some serious numbers for a car to put up, even by Gran Turismo standards. If you can’t get to L.A. to check out the full-size concept car in all its sci-fi glory, you can get it in the downloadable Gran Turismo 6 update coming this holiday season.