1Password has been hovering near the top of the App Store’s charts since it went freemium alongside the launch of iOS 8. Developed by Canadian company AgileBits, the popular password manager has been on the forefront of app development for Apple’s latest OS since WWDC in June.

After releasing an iOS 8-compatible version with iCloud Drive sync, Touch ID integration, and an adaptive layout, 1Password 5.1 is out today with more refinements.

The iPhone 6 and 6 Plus are both fully supported now, which means a non-steched interface.

While Touch ID could be used to authenticate the app before today, a master password was still required after quitting and re-opening. Many tricked 1Password into always authenticating with Touch ID by setting the app’s login settings to 30 days, but version 5.1 makes that no longer necessary. If enabled, you’ll no longer need to type in a password to unlock the app’s vault. 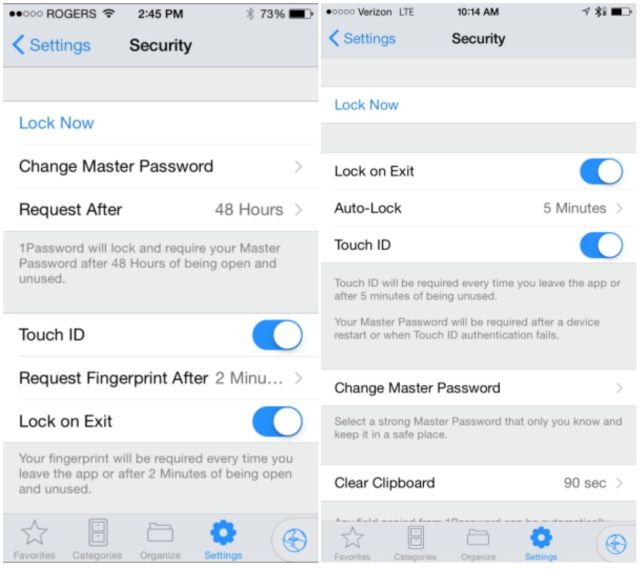 For more about how 1Password incorporated the Touch ID API, check out the AgileBits blog.

Finally, third-party keyboards can be enabled under settings. The reason for blocking them by default is that many are capable of logging keystrokes, which is something the security-focused developers at AgileBits obviously want to avoid.

Not only can 1Password be accessed nearly anywhere in iOS 8 thanks to its Share sheet extension, but many of the best third-party apps available support 1Password for entering login details. Thanks to the warm embrace of the developer community and the flexibility of iOS 8, 1Password is truly a viable (and in many cases) better alternative to Apple’s iCloud Keychain.

1Password is free to download and try in the App Store, and a $10 in-app purchase unlocks full functionality.